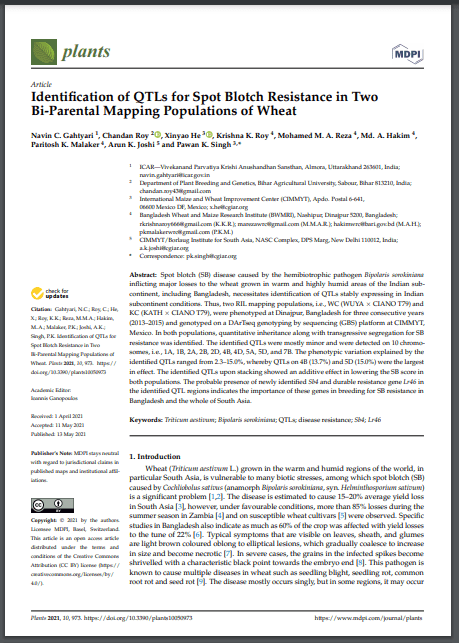 Spot blotch (SB) disease caused by the hemibiotrophic pathogen Bipolaris sorokiniana inflicting major losses to the wheat grown in warm and highly humid areas of the Indian subcontinent, including Bangladesh, necessitates identification of QTLs stably expressing in Indian subcontinent conditions. Thus, two RIL mapping populations, i.e., WC (WUYA × CIANO T79) and KC (KATH × CIANO T79), were phenotyped at Dinajpur, Bangladesh for three consecutive years (2013-2015) and genotyped on a DArTseq genotyping by sequencing (GBS) platform at CIMMYT, Mexico. In both populations, quantitative inheritance along with transgressive segregation for SB resistance was identified. The identified QTLs were mostly minor and were detected on 10 chromosomes, i.e., 1A, 1B, 2A, 2B, 2D, 4B, 4D, 5A, 5D, and 7B. The phenotypic variation explained by the identified QTLs ranged from 2.3–15.0%, whereby QTLs on 4B (13.7%) and 5D (15.0%) were the largest in effect. The identified QTLs upon stacking showed an additive effect in lowering the SB score in both populations. The probable presence of newly identified Sb4 and durable resistance gene Lr46 in the identified QTL regions indicates the importance of these genes in breeding for SB resistance in Bangladesh and the whole of South Asia.