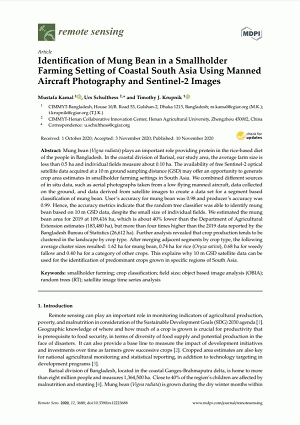 Identification of mung bean in a smallholder farming setting of coastal South Asia using manned aircraft photography and Sentinel-2 images
Mung bean (Vigna radiata) plays an important role providing protein in the rice-based diet of the people in Bangladesh. In the coastal division of Barisal, our study area, the average farm size is less than 0.5 ha and individual fields measure about 0.10 ha. The availability of free Sentinel-2 optical satellite data acquired at a 10 m ground sampling distance (GSD) may offer an opportunity to generate crop area estimates in smallholder farming settings in South Asia. We combined different sources of in situ data, such as aerial photographs taken from a low flying manned aircraft, data collected on the ground, and data derived from satellite images to create a data set for a segment based classification of mung bean. User’s accuracy for mung bean was 0.98 and producer’s accuracy was 0.99. Hence, the accuracy metrics indicate that the random tree classifier was able to identify mung bean based on 10 m GSD data, despite the small size of individual fields. We estimated the mung bean area for 2019 at 109,416 ha, which is about 40% lower than the Department of Agricultural Extension estimates (183,480 ha), but more than four times higher than the 2019 data reported by the Bangladesh Bureau of Statistics (26,612 ha). Further analysis revealed that crop production tends to be clustered in the landscape by crop type. After merging adjacent segments by crop type, the following average cluster sizes resulted: 1.62 ha for mung bean, 0.74 ha for rice (Oryza sativa), 0.68 ha for weedy fallow and 0.40 ha for a category of other crops. This explains why 10 m GSD satellite data can be used for the identification of predominant crops grown in specific regions of South Asia.