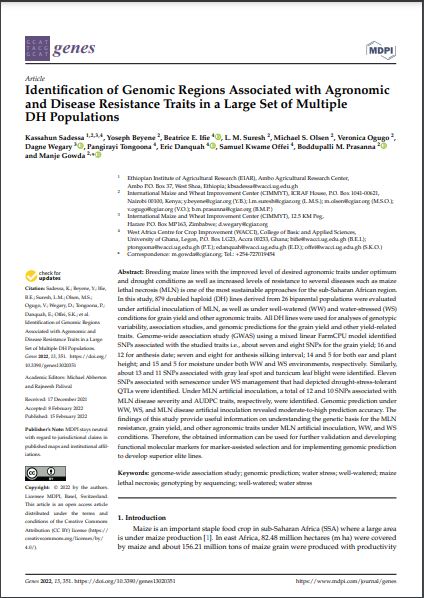 Breeding maize lines with the improved level of desired agronomic traits under optimum and drought conditions as well as increased levels of resistance to several diseases such as maize lethal necrosis (MLN) is one of the most sustainable approaches for the sub-Saharan African region. In this study, 879 doubled haploid (DH) lines derived from 26 biparental populations were evaluated under artificial inoculation of MLN, as well as under well-watered (WW) and water-stressed (WS) conditions for grain yield and other agronomic traits. All DH lines were used for analyses of genotypic variability, association studies, and genomic predictions for the grain yield and other yield-related traits. Genome-wide association study (GWAS) using a mixed linear FarmCPU model identified SNPs associated with the studied traits i.e., about seven and eight SNPs for the grain yield; 16 and 12 for anthesis date; seven and eight for anthesis silking interval; 14 and 5 for both ear and plant height; and 15 and 5 for moisture under both WW and WS environments, respectively. Similarly, about 13 and 11 SNPs associated with gray leaf spot and turcicum leaf blight were identified. Eleven SNPs associated with senescence under WS management that had depicted drought-stress-tolerant QTLs were identified. Under MLN artificial inoculation, a total of 12 and 10 SNPs associated with MLN disease severity and AUDPC traits, respectively, were identified. Genomic prediction under WW, WS, and MLN disease artificial inoculation revealed moderate-to-high prediction accuracy. The findings of this study provide useful information on understanding the genetic basis for the MLN resistance, grain yield, and other agronomic traits under MLN artificial inoculation, WW, and WS conditions. Therefore, the obtained information can be used for further validation and developing functional molecular markers for marker-assisted selection and for implementing genomic prediction to develop superior elite lines.