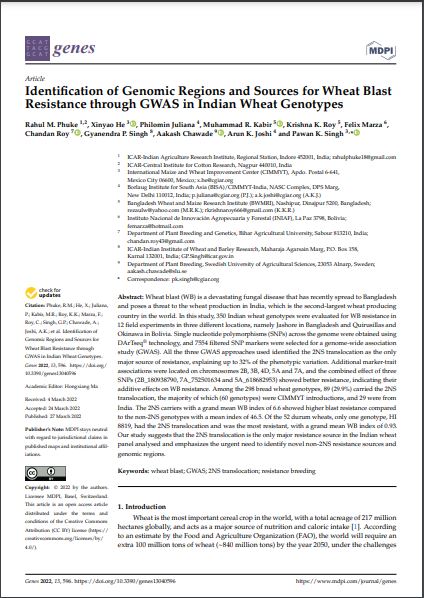 Wheat blast (WB) is a devastating fungal disease that has recently spread to Bangladesh and poses a threat to the wheat production in India, which is the second-largest wheat producing country in the world. In this study, 350 Indian wheat genotypes were evaluated for WB resistance in 12 field experiments in three different locations, namely Jashore in Bangladesh and Quirusillas and Okinawa in Bolivia. Single nucleotide polymorphisms (SNPs) across the genome were obtained using DArTseq® technology, and 7554 filtered SNP markers were selected for a genome-wide association study (GWAS). All the three GWAS approaches used identified the 2NS translocation as the only major source of resistance, explaining up to 32% of the phenotypic variation. Additional marker-trait associations were located on chromosomes 2B, 3B, 4D, 5A and 7A, and the combined effect of three SNPs (2B_180938790, 7A_752501634 and 5A_618682953) showed better resistance, indicating their additive effects on WB resistance. Among the 298 bread wheat genotypes, 89 (29.9%) carried the 2NS translocation, the majority of which (60 genotypes) were CIMMYT introductions, and 29 were from India. The 2NS carriers with a grand mean WB index of 6.6 showed higher blast resistance compared to the non-2NS genotypes with a mean index of 46.5. Of the 52 durum wheats, only one genotype, HI 8819, had the 2NS translocation and was the most resistant, with a grand mean WB index of 0.93. Our study suggests that the 2NS translocation is the only major resistance source in the Indian wheat panel analysed and emphasizes the urgent need to identify novel non-2NS resistance sources and genomic regions.