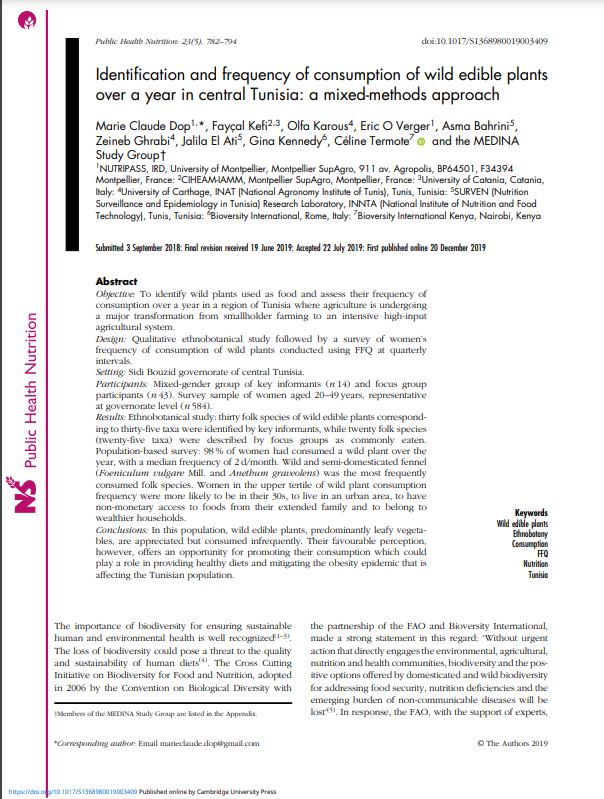 Objective: To identify wild plants used as food and assess their frequency of consumption over a year in a region of Tunisia where agriculture is undergoing a major transformation from smallholder farming to an intensive high-input agricultural system.

Results: Ethnobotanical study: thirty folk species of wild edible plants corresponding to thirty-five taxa were identified by key informants, while twenty folk species (twenty-five taxa) were described by focus groups as commonly eaten. Population-based survey: 98 % of women had consumed a wild plant over the year, with a median frequency of 2 d/month. Wild and semi-domesticated fennel (Foeniculum vulgare Mill. and Anethum graveolens) was the most frequently consumed folk species. Women in the upper tertile of wild plant consumption frequency were more likely to be in their 30s, to live in an urban area, to have non-monetary access to foods from their extended family and to belong to wealthier households.

Conclusions: In this population, wild edible plants, predominantly leafy vegetables, are appreciated but consumed infrequently. Their favourable perception, however, offers an opportunity for promoting their consumption which could play a role in providing healthy diets and mitigating the obesity epidemic that is affecting the Tunisian population.