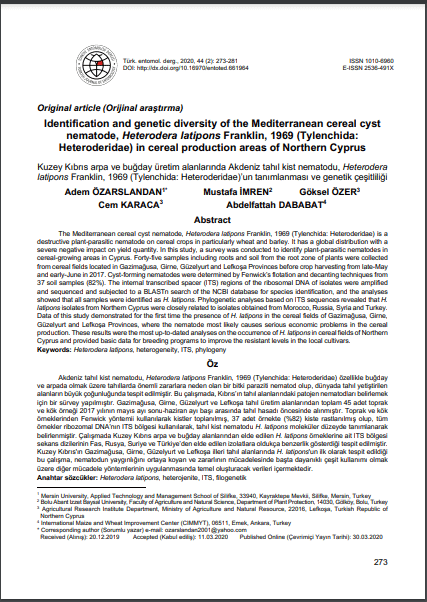 The Mediterranean cereal cyst nematode, Heterodera latipons Franklin, 1969 (Tylenchida: Heteroderidae) is a destructive plant-parasitic nematode on cereal crops in particularly wheat and barley. It has a global distribution with a severe negative impact on yield quantity. In this study, a survey was conducted to identify plant-parasitic nematodes in cereal-growing areas in Cyprus. Forty-five samples including roots and soil from the root zone of plants were collected from cereal fields located in Gazimağusa, Girne, Güzelyurt and Lefkoşa Provinces before crop harvesting from late-May and early-June in 2017. Cyst-forming nematodes were determined by Fenwick’s flotation and decanting techniques from 37 soil samples (82%). The internal transcribed spacer (ITS) regions of the ribosomal DNA of isolates were amplified and sequenced and subjected to a BLASTn search of the NCBI database for species identification, and the analyses showed that all samples were identified as H. latipons. Phylogenetic analyses based on ITS sequences revealed that H. latipons isolates from Northern Cyprus were closely related to isolates obtained from Morocco, Russia, Syria and Turkey. Data of this study demonstrated for the first time the presence of H. latipons in the cereal fields of Gazimağusa, Girne, Güzelyurt and Lefkoşa Provinces, where the nematode most likely causes serious economic problems in the cereal production. These results were the most up-to-dated analyses on the occurrence of H. latipons in cereal fields of Northern Cyprus and provided basic data for breeding programs to improve the resistant levels in the local cultivars.