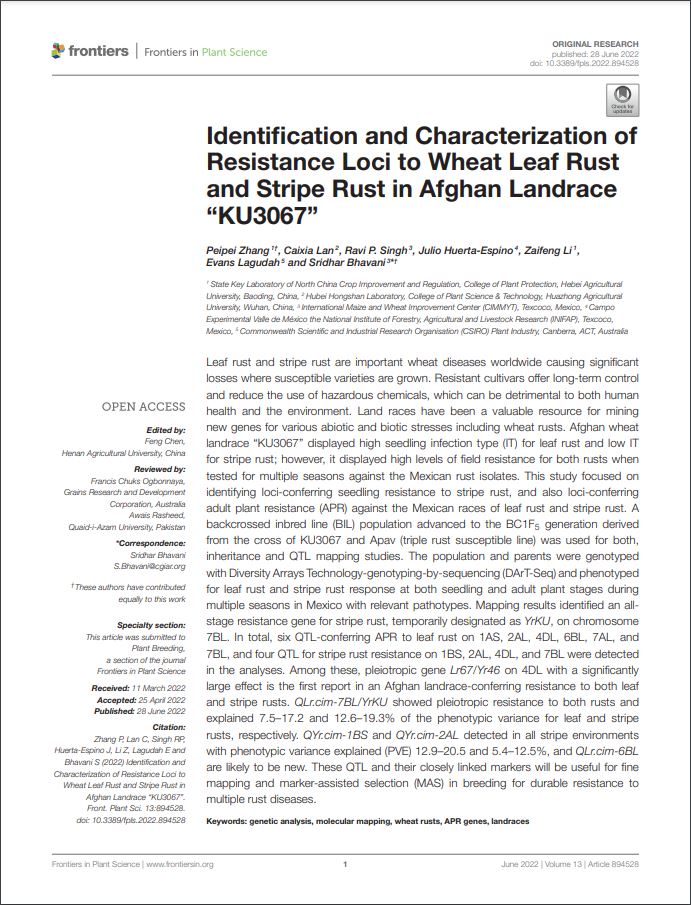 Leaf rust and stripe rust are important wheat diseases worldwide causing significant losses where susceptible varieties are grown. Resistant cultivars offer long-term control and reduce the use of hazardous chemicals, which can be detrimental to both human health and the environment. Land races have been a valuable resource for mining new genes for various abiotic and biotic stresses including wheat rusts. Afghan wheat landrace “KU3067” displayed high seedling infection type (IT) for leaf rust and low IT for stripe rust; however, it displayed high levels of field resistance for both rusts when tested for multiple seasons against the Mexican rust isolates. This study focused on identifying loci-conferring seedling resistance to stripe rust, and also loci-conferring adult plant resistance (APR) against the Mexican races of leaf rust and stripe rust. A backcrossed inbred line (BIL) population advanced to the BC1F5 generation derived from the cross of KU3067 and Apav (triple rust susceptible line) was used for both, inheritance and QTL mapping studies. The population and parents were genotyped with Diversity Arrays Technology-genotyping-by-sequencing (DArT-Seq) and phenotyped for leaf rust and stripe rust response at both seedling and adult plant stages during multiple seasons in Mexico with relevant pathotypes. Mapping results identified an all-stage resistance gene for stripe rust, temporarily designated as YrKU, on chromosome 7BL. In total, six QTL-conferring APR to leaf rust on 1AS, 2AL, 4DL, 6BL, 7AL, and 7BL, and four QTL for stripe rust resistance on 1BS, 2AL, 4DL, and 7BL were detected in the analyses. Among these, pleiotropic gene Lr67/Yr46 on 4DL with a significantly large effect is the first report in an Afghan landrace-conferring resistance to both leaf and stripe rusts. QLr.cim-7BL/YrKU showed pleiotropic resistance to both rusts and explained 7.5–17.2 and 12.6–19.3% of the phenotypic variance for leaf and stripe rusts, respectively. QYr.cim-1BS and QYr.cim-2AL detected in all stripe environments with phenotypic variance explained (PVE) 12.9–20.5 and 5.4–12.5%, and QLr.cim-6BL are likely to be new. These QTL and their closely linked markers will be useful for fine mapping and marker-assisted selection (MAS) in breeding for durable resistance to multiple rust diseases.