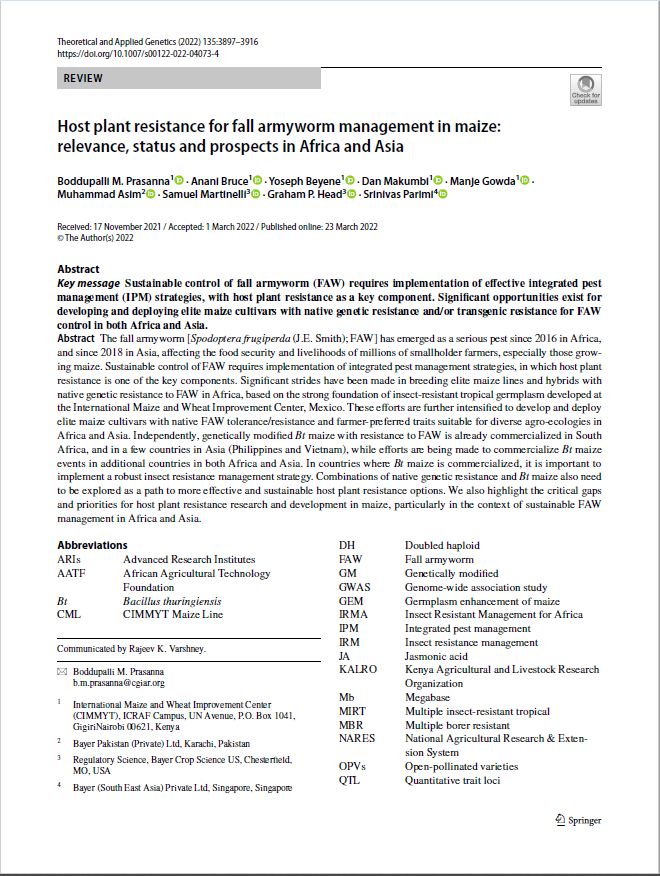 The fall armyworm [Spodoptera frugiperda (J.E. Smith); FAW] has emerged as a serious pest since 2016 in Africa, and since 2018 in Asia, affecting the food security and livelihoods of millions of smallholder farmers, especially those growing maize. Sustainable control of FAW requires implementation of integrated pest management strategies, in which host plant resistance is one of the key components. Significant strides have been made in breeding elite maize lines and hybrids with native genetic resistance to FAW in Africa, based on the strong foundation of insect-resistant tropical germplasm developed at the International Maize and Wheat Improvement Center, Mexico. These efforts are further intensified to develop and deploy elite maize cultivars with native FAW tolerance/resistance and farmer-preferred traits suitable for diverse agro-ecologies in Africa and Asia. Independently, genetically modified Bt maize with resistance to FAW is already commercialized in South Africa, and in a few countries in Asia (Philippines and Vietnam), while efforts are being made to commercialize Bt maize events in additional countries in both Africa and Asia. In countries where Bt maize is commercialized, it is important to implement a robust insect resistance management strategy. Combinations of native genetic resistance and Bt maize also need to be explored as a path to more effective and sustainable host plant resistance options. We also highlight the critical gaps and priorities for host plant resistance research and development in maize, particularly in the context of sustainable FAW management in Africa and Asia.