Gathering honey from wild and traditional hives in the Miombo woodlands of the Niassa National Reserve, Mozambique 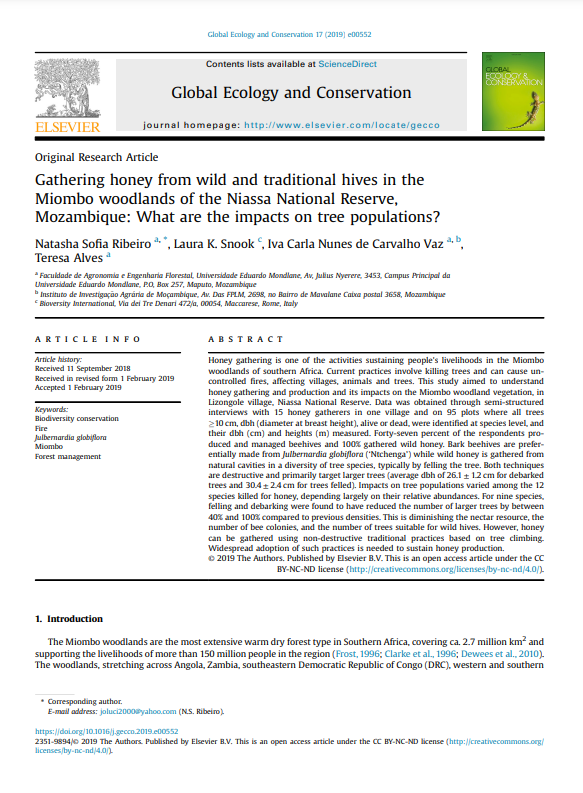 Honey gathering is one of the activities sustaining people’s livelihoods in the Miombowoodlands of southern Africa. Current practices involve killing trees and can cause un-controlledfires, affecting villages, animals and trees.

This study aimed to understandhoney gathering and production and its impacts on the Miombo woodland vegetation, inLizongole village, Niassa National Reserve. Data was obtained through semi-structuredinterviews with 15 honey gatherers in one village and on 95 plots where all trees 10 cm, dbh (diameter at breast height), alive or dead, were identified at species level, andtheir dbh (cm) and heights (m) measured. Forty-seven percent of the respondents pro-duced and managed beehives and 100% gathered wild honey.

Bark beehives are prefer-entially made fromJulbernardia globiflora(‘Ntchenga’) while wild honey is gathered fromnatural cavities in a diversity of tree species, typically by felling the tree. Both techniquesare destructive and primarily target larger trees (average dbh of 26.1±1.2 cm for debarkedtrees and 30.4±2.4 cm for trees felled). Impacts on tree populations varied among the 12species killed for honey, depending largely on their relative abundances. For nine species,felling and debarking were found to have reduced the number of larger trees by between40% and 100% compared to previous densities. This is diminishing the nectar resource, thenumber of bee colonies, and the number of trees suitable for wild hives. However, honeycan be gathered using non-destructive traditional practices based on tree climbing.Widespread adoption of such practices is needed to sustain honey production.