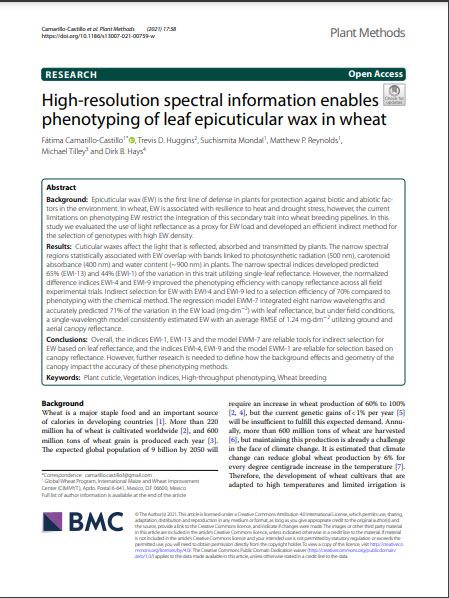 Background: Epicuticular wax (EW) is the first line of defense in plants for protection against biotic and abiotic factors in the environment. In wheat, EW is associated with resilience to heat and drought stress, however, the current limitations on phenotyping EW restrict the integration of this secondary trait into wheat breeding pipelines. In this study we evaluated the use of light reflectance as a proxy for EW load and developed an efficient indirect method for the selection of genotypes with high EW density. Results: Cuticular waxes affect the light that is reflected, absorbed and transmitted by plants. The narrow spectral regions statistically associated with EW overlap with bands linked to photosynthetic radiation (500 nm), carotenoid absorbance (400 nm) and water content (~ 900 nm) in plants. The narrow spectral indices developed predicted 65% (EWI-13) and 44% (EWI-1) of the variation in this trait utilizing single-leaf reflectance. However, the normalized difference indices EWI-4 and EWI-9 improved the phenotyping efficiency with canopy reflectance across all field experimental trials. Indirect selection for EW with EWI-4 and EWI-9 led to a selection efficiency of 70% compared to phenotyping with the chemical method. The regression model EWM-7 integrated eight narrow wavelengths and accurately predicted 71% of the variation in the EW load (mg·dm−2) with leaf reflectance, but under field conditions, a single-wavelength model consistently estimated EW with an average RMSE of 1.24 mg·dm−2 utilizing ground and aerial canopy reflectance. Conclusions: Overall, the indices EWI-1, EWI-13 and the model EWM-7 are reliable tools for indirect selection for EW based on leaf reflectance, and the indices EWI-4, EWI-9 and the model EWM-1 are reliable for selection based on canopy reflectance. However, further research is needed to define how the background effects and geometry of the canopy impact the accuracy of these phenotyping methods.