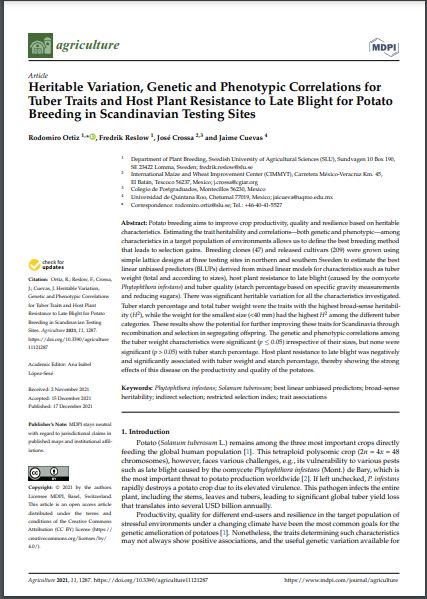 Potato breeding aims to improve crop productivity, quality and resilience based on heritable characteristics. Estimating the trait heritability and correlations—both genetic and phenotypic—among characteristics in a target population of environments allows us to define the best breeding method that leads to selection gains. Breeding clones (47) and released cultivars (209) were grown using simple lattice designs at three testing sites in northern and southern Sweden to estimate the best linear unbiased predictors (BLUPs) derived from mixed linear models for characteristics such as tuber weight (total and according to sizes), host plant resistance to late blight (caused by the oomycete Phytophthora infestans) and tuber quality (starch percentage based on specific gravity measurements and reducing sugars). There was significant heritable variation for all the characteristics investigated. Tuber starch percentage and total tuber weight were the traits with the highest broad-sense heritability (H2), while the weight for the smallest size (<40 mm) had the highest H2 among the different tuber categories. These results show the potential for further improving these traits for Scandinavia through recombination and selection in segregating offspring. The genetic and phenotypic correlations among the tuber weight characteristics were significant (p ≤ 0.05) irrespective of their sizes, but none were significant (p > 0.05) with tuber starch percentage. Host plant resistance to late blight was negatively and significantly associated with tuber weight and starch percentage, thereby showing the strong effects of this disease on the productivity and quality of the potatoes.