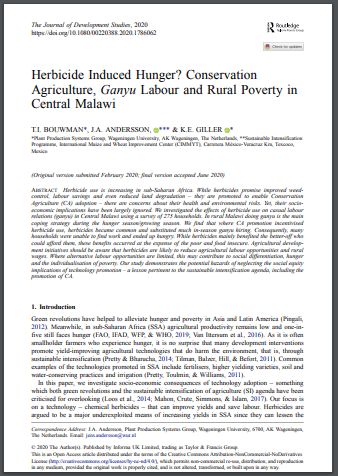 Herbicide use is increasing in sub-Saharan Africa. While herbicides promise improved weed-control, labour savings and even reduced land degradation–they are promoted to enable Conservation Agriculture (CA) adoption–there are concerns about their health and environmental risks. Yet, their socio-economic implications have been largely ignored. We investigated the effects of herbicide use on casual labour relations (ganyu) in Central Malawi using a survey of 275 households. In rural Malawi doing ganyu is the main coping strategy during the hunger season/growing season. We find that where CA promotion incentivised herbicide use, herbicides became common and substituted much in-season ganyu hiring. Consequently, many households were unable to find work and ended up hungry. While herbicides mainly benefited the better-off who could afford them, these benefits occurred at the expense of the poor and food insecure. Agricultural development initiatives should be aware that herbicides are likely to reduce agricultural labour opportunities and rural wages. Where alternative labour opportunities are limited, this may contribute to social differentiation, hunger and the individualisation of poverty. Our study demonstrates the potential hazards of neglecting the social equity implications of technology promotion–a lesson pertinent to the sustainable intensification agenda, including the promotion of CA.