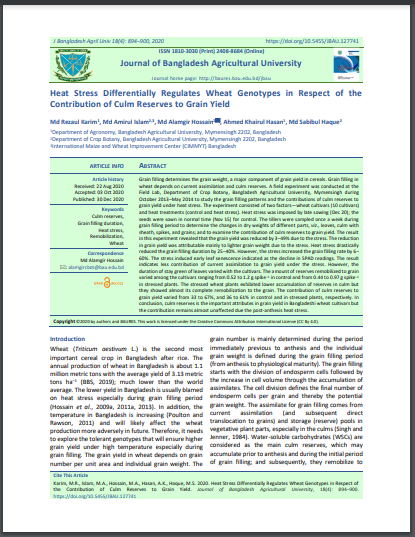 Grain filling determines the grain weight, a major component of grain yield in cereals. Grain filling in wheat depends on current assimilation and culm reserves. A field experiment was conducted at the Field Lab, Department of Crop Botany, Bangladesh Agricultural University, Mymensingh during October 2013–May 2014 to study the grain filling patterns and the contributions of culm reserves to grain yield under heat stress. The experiment consisted of two factors—wheat cultivars (10 cultivars) and heat treatments (control and heat stress). Heat stress was imposed by late sowing (Dec 20); the seeds were sown in normal time (Nov 15) for control. The tillers were sampled once a week during grain filling period to determine the changes in dry weights of different parts, viz., leaves, culm with sheath, spikes, and grains; and to examine the contribution of culm reserves to grain yield. The result in this experiment revealed that the grain yield was reduced by 3–49% due to the stress. The reduction in grain yield was attributable mainly to lighter grain weight due to the stress. Heat stress drastically reduced the grain filling duration by 25–40%. However, the stress increased the grain filling rate by 6–60%. The stress induced early leaf senescence indicated as the decline in SPAD readings. The result indicates less contribution of current assimilation to grain yield under the stress. However, the duration of stay green of leaves varied with the cultivars. The amount of reserves remobilized to grain varied among the cultivars ranging from 0.52 to 1.2 g spike−1 in control and from 0.44 to 0.97 g spike−1 in stressed plants. The stressed wheat plants exhibited lower accumulation of reserves in culm but they showed almost its complete remobilization to the grain. The contribution of culm reserves to grain yield varied from 33 to 67%, and 36 to 61% in control and in stressed plants, respectively. In conclusion, culm reserves is the important attributes in grain yield in Bangladeshi wheat cultivars but the contribution remains almost unaffected due the post-anthesis heat stress.