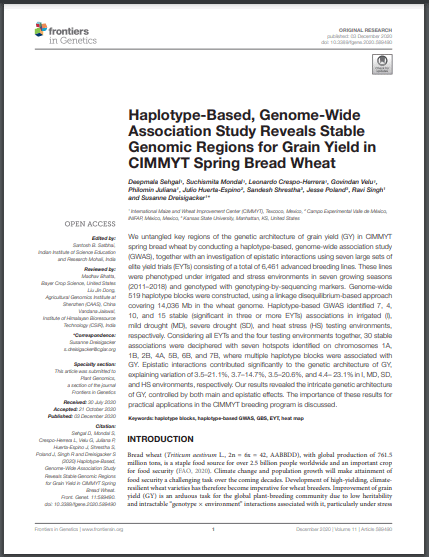 We untangled key regions of the genetic architecture of grain yield (GY) in CIMMYT spring bread wheat by conducting a haplotype-based, genome-wide association study (GWAS), together with an investigation of epistatic interactions using seven large sets of elite yield trials (EYTs) consisting of a total of 6,461 advanced breeding lines. These lines were phenotyped under irrigated and stress environments in seven growing seasons (2011–2018) and genotyped with genotyping-by-sequencing markers. Genome-wide 519 haplotype blocks were constructed, using a linkage disequilibrium-based approach covering 14,036 Mb in the wheat genome. Haplotype-based GWAS identified 7, 4, 10, and 15 stable (significant in three or more EYTs) associations in irrigated (I), mild drought (MD), severe drought (SD), and heat stress (HS) testing environments, respectively. Considering all EYTs and the four testing environments together, 30 stable associations were deciphered with seven hotspots identified on chromosomes 1A, 1B, 2B, 4A, 5B, 6B, and 7B, where multiple haplotype blocks were associated with GY. Epistatic interactions contributed significantly to the genetic architecture of GY, explaining variation of 3.5–21.1%, 3.7–14.7%, 3.5–20.6%, and 4.4– 23.1% in I, MD, SD, and HS environments, respectively. Our results revealed the intricate genetic architecture of GY, controlled by both main and epistatic effects. The importance of these results for practical applications in the CIMMYT breeding program is discussed.