Groundnut improvement: use of genetic and genomic tools 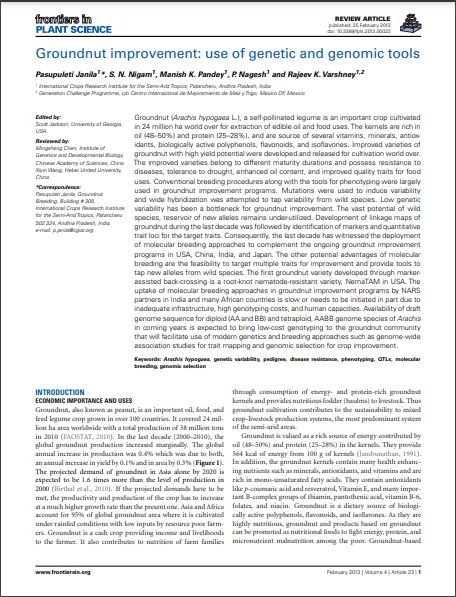 Groundnut (Arachis hypogaea L.), a self-pollinated legume is an important crop cultivated in 24 million ha world over for extraction of edible oil and food uses. The kernels are rich in oil (48-50%) and protein (25-28%), and are source of several vitamins, minerals, antioxidants, biologically active polyphenols, flavonoids, and isoflavones. Improved varieties of groundnut with high yield potential were developed and released for cultivation world over. The improved varieties belong to different maturity durations and possess resistance to diseases, tolerance to drought, enhanced oil content, and improved quality traits for food uses. Conventional breeding procedures along with the tools for phenotyping were largely used in groundnut improvement programs. Mutations were used to induce variability and wide hybridization was attempted to tap variability from wild species. Low genetic variability has been a bottleneck for groundnut improvement. The vast potential of wild species, reservoir of new alleles remains under-utilized. Development of linkage maps of groundnut during the last decade was followed by identification of markers and quantitative trait loci for the target traits. Consequently, the last decade has witnessed the deployment of molecular breeding approaches to complement the ongoing groundnut improvement programs in USA, China, India, and Japan. The other potential advantages of molecular breeding are the feasibility to target multiple traits for improvement and provide tools to tap new alleles from wild species. The first groundnut variety developed through marker-assisted back-crossing is a root-knot nematode-resistant variety, NemaTAM in USA. The uptake of molecular breeding approaches in groundnut improvement programs by NARS partners in India and many African countries is slow or needs to be initiated in part due to inadequate infrastructure, high genotyping costs, and human capacities. Availability of draft genome sequence for diploid (AA and BB) and tetraploid, AABB genome species of Arachis in coming years is expected to bring low-cost genotyping to the groundnut community that will facilitate use of modern genetics and breeding approaches such as genome-wide association studies for trait mapping and genomic selection for crop improvement.