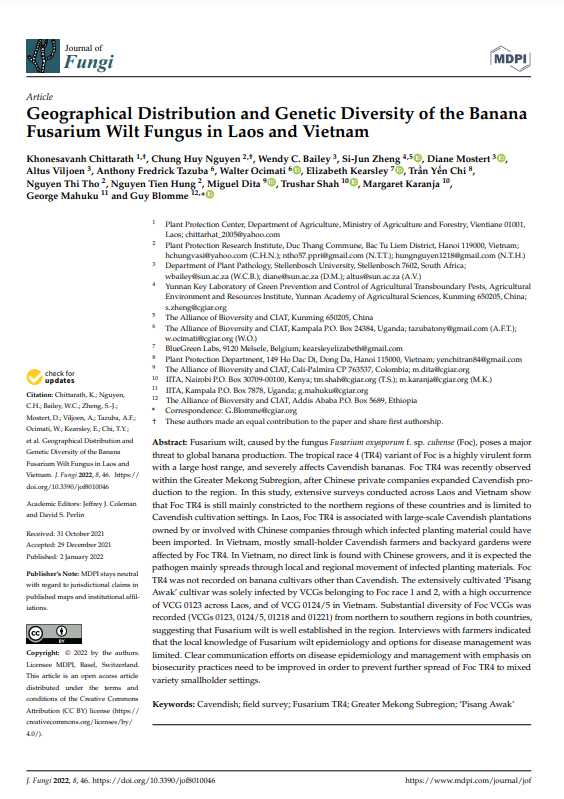 Fusarium wilt, caused by the fungus Fusarium oxysporum f. sp. cubense (Foc), poses a major threat to global banana production. The tropical race 4 (TR4) variant of Foc is a highly virulent form with a large host range, and severely affects Cavendish bananas. Foc TR4 was recently observed within the Greater Mekong Subregion, after Chinese private companies expanded Cavendish production to the region. In this study, extensive surveys conducted across Laos and Vietnam show that Foc TR4 is still mainly constricted to the northern regions of these countries and is limited to Cavendish cultivation settings.

In Laos, Foc TR4 is associated with large-scale Cavendish plantations owned by or involved with Chinese companies through which infected planting material could have been imported. In Vietnam, mostly small-holder Cavendish farmers and backyard gardens were affected by Foc TR4. In Vietnam, no direct link is found with Chinese growers, and it is expected the pathogen mainly spreads through local and regional movement of infected planting materials. Foc TR4 was not recorded on banana cultivars other than Cavendish. The extensively cultivated ‘Pisang Awak’ cultivar was solely infected by VCGs belonging to Foc race 1 and 2, with a high occurrence of VCG 0123 across Laos, and of VCG 0124/5 in Vietnam. Substantial diversity of Foc VCGs was recorded (VCGs 0123, 0124/5, 01218 and 01221) from northern to southern regions in both countries, suggesting that Fusarium wilt is well established in the region.

Interviews with farmers indicated that the local knowledge of Fusarium wilt epidemiology and options for disease management was limited. Clear communication efforts on disease epidemiology and management with emphasis on biosecurity practices need to be improved in order to prevent further spread of Foc TR4 to mixed variety smallholder settings.