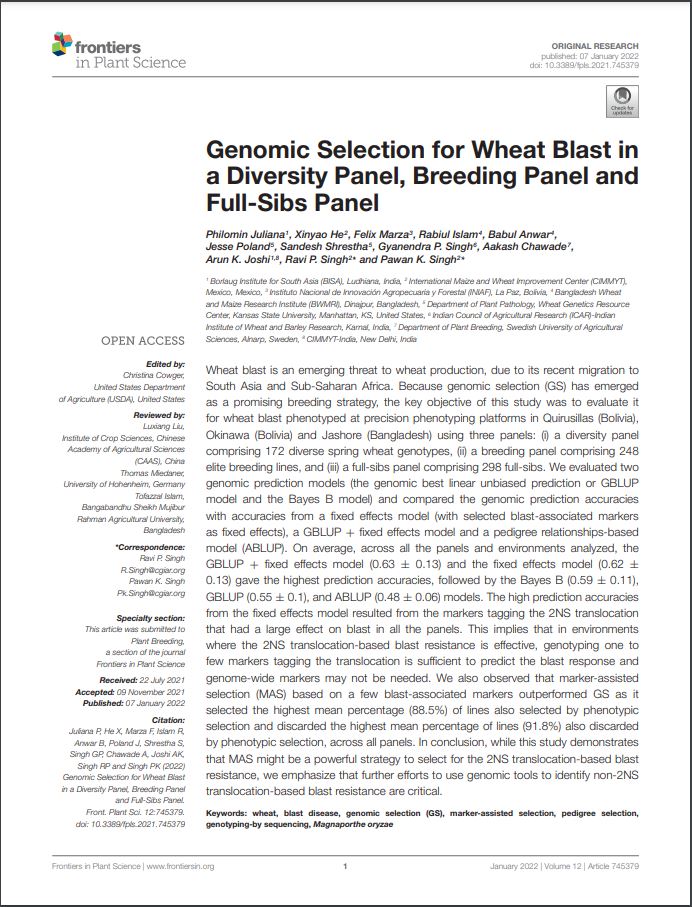 Wheat blast is an emerging threat to wheat production, due to its recent migration to South Asia and Sub-Saharan Africa. Because genomic selection (GS) has emerged as a promising breeding strategy, the key objective of this study was to evaluate it for wheat blast phenotyped at precision phenotyping platforms in Quirusillas (Bolivia), Okinawa (Bolivia) and Jashore (Bangladesh) using three panels: (i) a diversity panel comprising 172 diverse spring wheat genotypes, (ii) a breeding panel comprising 248 elite breeding lines, and (iii) a full-sibs panel comprising 298 full-sibs. We evaluated two genomic prediction models (the genomic best linear unbiased prediction or GBLUP model and the Bayes B model) and compared the genomic prediction accuracies with accuracies from a fixed effects model (with selected blast-associated markers as fixed effects), a GBLUP + fixed effects model and a pedigree relationships-based model (ABLUP). On average, across all the panels and environments analyzed, the GBLUP + fixed effects model (0.63 ± 0.13) and the fixed effects model (0.62 ± 0.13) gave the highest prediction accuracies, followed by the Bayes B (0.59 ± 0.11), GBLUP (0.55 ± 0.1), and ABLUP (0.48 ± 0.06) models. The high prediction accuracies from the fixed effects model resulted from the markers tagging the 2NS translocation that had a large effect on blast in all the panels. This implies that in environments where the 2NS translocation-based blast resistance is effective, genotyping one to few markers tagging the translocation is sufficient to predict the blast response and genome-wide markers may not be needed. We also observed that marker-assisted selection (MAS) based on a few blast-associated markers outperformed GS as it selected the highest mean percentage (88.5%) of lines also selected by phenotypic selection and discarded the highest mean percentage of lines (91.8%) also discarded by phenotypic selection, across all panels. In conclusion, while this study demonstrates that MAS might be a powerful strategy to select for the 2NS translocation-based blast resistance, we emphasize that further efforts to use genomic tools to identify non-2NS translocation-based blast resistance are critical.