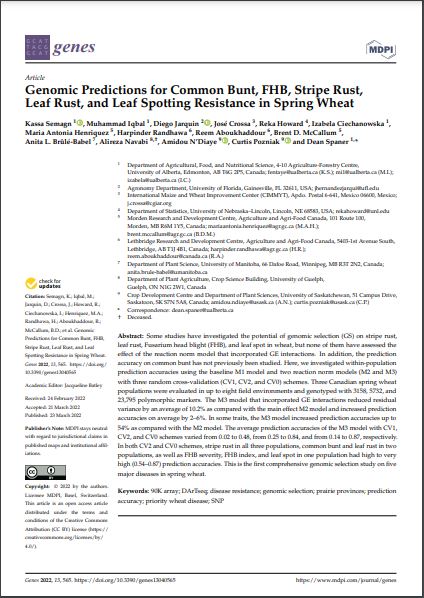 Some studies have investigated the potential of genomic selection (GS) on stripe rust, leaf rust, Fusarium head blight (FHB), and leaf spot in wheat, but none of them have assessed the effect of the reaction norm model that incorporated GE interactions. In addition, the prediction accuracy on common bunt has not previously been studied. Here, we investigated within-population prediction accuracies using the baseline M1 model and two reaction norm models (M2 and M3) with three random cross-validation (CV1, CV2, and CV0) schemes. Three Canadian spring wheat populations were evaluated in up to eight field environments and genotyped with 3158, 5732, and 23,795 polymorphic markers. The M3 model that incorporated GE interactions reduced residual variance by an average of 10.2% as compared with the main effect M2 model and increased prediction accuracies on average by 2–6%. In some traits, the M3 model increased prediction accuracies up to 54% as compared with the M2 model. The average prediction accuracies of the M3 model with CV1, CV2, and CV0 schemes varied from 0.02 to 0.48, from 0.25 to 0.84, and from 0.14 to 0.87, respectively. In both CV2 and CV0 schemes, stripe rust in all three populations, common bunt and leaf rust in two populations, as well as FHB severity, FHB index, and leaf spot in one population had high to very high (0.54–0.87) prediction accuracies. This is the first comprehensive genomic selection study on five major diseases in spring wheat.