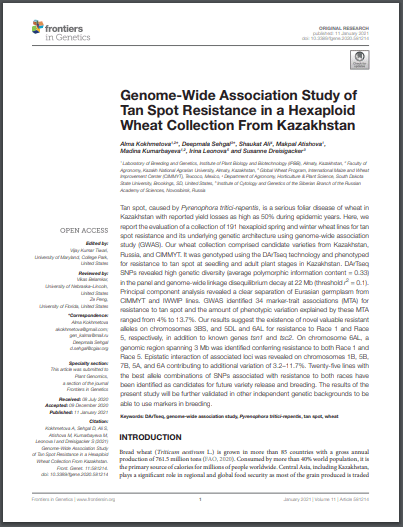 Tan spot, caused by Pyrenophora tritici-repentis, is a serious foliar disease of wheat in Kazakhstan with reported yield losses as high as 50% during epidemic years. Here, we report the evaluation of a collection of 191 hexaploid spring and winter wheat lines for tan spot resistance and its underlying genetic architecture using genome-wide association study (GWAS). Our wheat collection comprised candidate varieties from Kazakhstan, Russia, and CIMMYT. It was genotyped using the DArTseq technology and phenotyped for resistance to tan spot at seedling and adult plant stages in Kazakhstan. DArTseq SNPs revealed high genetic diversity (average polymorphic information content = 0.33) in the panel and genome-wide linkage disequilibrium decay at 22 Mb (threshold r2 = 0.1). Principal component analysis revealed a clear separation of Eurasian germplasm from CIMMYT and IWWIP lines. GWAS identified 34 marker-trait associations (MTA) for resistance to tan spot and the amount of phenotypic variation explained by these MTA ranged from 4% to 13.7%. Our results suggest the existence of novel valuable resistant alleles on chromosomes 3BS, and 5DL and 6AL for resistance to Race 1 and Race 5, respectively, in addition to known genes tsn1 and tsc2. On chromosome 6AL, a genomic region spanning 3 Mb was identified conferring resistance to both Race 1 and Race 5. Epistatic interaction of associated loci was revealed on chromosomes 1B, 5B, 7B, 5A, and 6A contributing to additional variation of 3.2–11.7%. Twenty-five lines with the best allele combinations of SNPs associated with resistance to both races have been identified as candidates for future variety release and breeding. The results of the present study will be further validated in other independent genetic backgrounds to be able to use markers in breeding.