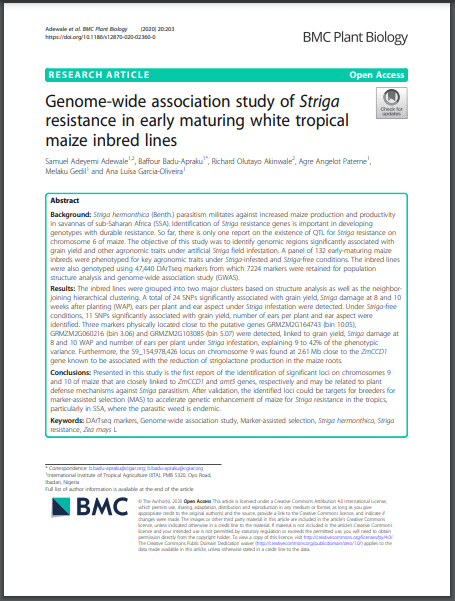 Background: Striga hermonthica (Benth.) parasitism militates against increased maize production and productivity in savannas of sub-Saharan Africa (SSA). Identification of Striga resistance genes is important in developing genotypes with durable resistance. So far, there is only one report on the existence of QTL for Striga resistance on chromosome 6 of maize. The objective of this study was to identify genomic regions significantly associated with grain yield and other agronomic traits under artificial Striga field infestation. A panel of 132 early-maturing maize inbreds were phenotyped for key agronomic traits under Striga-infested and Striga-free conditions. The inbred lines were also genotyped using 47,440 DArTseq markers from which 7224 markers were retained for population structure analysis and genome-wide association study (GWAS). Results: The inbred lines were grouped into two major clusters based on structure analysis as well as the neighbor-joining hierarchical clustering. A total of 24 SNPs significantly associated with grain yield, Striga damage at 8 and 10 weeks after planting (WAP), ears per plant and ear aspect under Striga infestation were detected. Under Striga-free conditions, 11 SNPs significantly associated with grain yield, number of ears per plant and ear aspect were identified. Three markers physically located close to the putative genes GRMZM2G164743 (bin 10.05), GRMZM2G060216 (bin 3.06) and GRMZM2G103085 (bin 5.07) were detected, linked to grain yield, Striga damage at 8 and 10 WAP and number of ears per plant under Striga infestation, explaining 9 to 42% of the phenotypic variance. Furthermore, the S9_154,978,426 locus on chromosome 9 was found at 2.61 Mb close to the ZmCCD1 gene known to be associated with the reduction of strigolactone production in the maize roots. Conclusions: Presented in this study is the first report of the identification of significant loci on chromosomes 9 and 10 of maize that are closely linked to ZmCCD1 and amt5 genes, respectively and may be related to plant defense mechanisms against Striga parasitism. After validation, the identified loci could be targets for breeders for marker-assisted selection (MAS) to accelerate genetic enhancement of maize for Striga resistance in the tropics, particularly in SSA, where the parasitic weed is endemic.