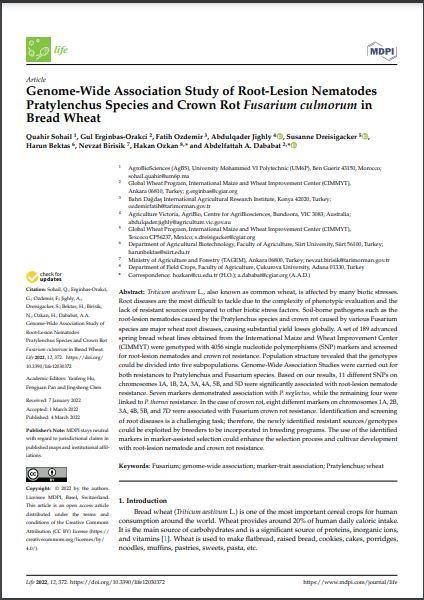 Triticum aestivum L., also known as common wheat, is affected by many biotic stresses. Root diseases are the most difficult to tackle due to the complexity of phenotypic evaluation and the lack of resistant sources compared to other biotic stress factors. Soil-borne pathogens such as the root-lesion nematodes caused by the Pratylenchus species and crown rot caused by various Fusarium species are major wheat root diseases, causing substantial yield losses globally. A set of 189 advanced spring bread wheat lines obtained from the International Maize and Wheat Improvement Center (CIMMYT) were genotyped with 4056 single nucleotide polymorphisms (SNP) markers and screened for root-lesion nematodes and crown rot resistance. Population structure revealed that the genotypes could be divided into five subpopulations. Genome-Wide Association Studies were carried out for both resistances to Pratylenchus and Fusarium species. Based on our results, 11 different SNPs on chromosomes 1A, 1B, 2A, 3A, 4A, 5B, and 5D were significantly associated with root-lesion nematode resistance. Seven markers demonstrated association with P. neglectus, while the remaining four were linked to P. thornei resistance. In the case of crown rot, eight different markers on chromosomes 1A, 2B, 3A, 4B, 5B, and 7D were associated with Fusarium crown rot resistance. Identification and screening of root diseases is a challenging task; therefore, the newly identified resistant sources/genotypes could be exploited by breeders to be incorporated in breeding programs. The use of the identified markers in marker-assisted selection could enhance the selection process and cultivar development with root-lesion nematode and crown rot resistance.