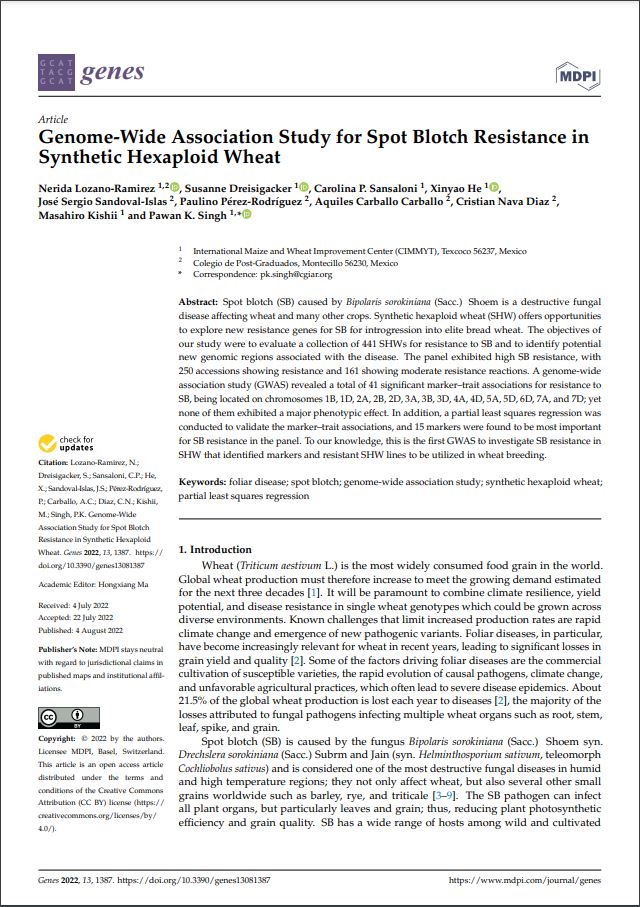 Spot blotch (SB) caused by Bipolaris sorokiniana (Sacc.) Shoem is a destructive fungal disease affecting wheat and many other crops. Synthetic hexaploid wheat (SHW) offers opportunities to explore new resistance genes for SB for introgression into elite bread wheat. The objectives of our study were to evaluate a collection of 441 SHWs for resistance to SB and to identify potential new genomic regions associated with the disease. The panel exhibited high SB resistance, with 250 accessions showing resistance and 161 showing moderate resistance reactions. A genome-wide association study (GWAS) revealed a total of 41 significant marker-trait associations for resistance to SB, being located on chromosomes 1B, 1D, 2A, 2B, 2D, 3A, 3B, 3D, 4A, 4D, 5A, 5D, 6D, 7A, and 7D; yet none of them exhibited a major phenotypic effect. In addition, a partial least squares regression was conducted to validate the marker-trait associations, and 15 markers were found to be most important for SB resistance in the panel. To our knowledge, this is the first GWAS to investigate SB resistance in SHW that identified markers and resistant SHW lines to be utilized in wheat breeding.