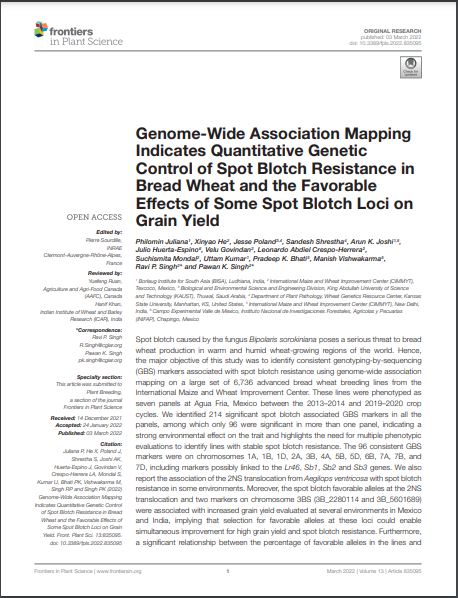 Spot blotch caused by the fungus Bipolaris sorokiniana poses a serious threat to bread wheat production in warm and humid wheat-growing regions of the world. Hence, the major objective of this study was to identify consistent genotyping-by-sequencing (GBS) markers associated with spot blotch resistance using genome-wide association mapping on a large set of 6,736 advanced bread wheat breeding lines from the International Maize and Wheat Improvement Center. These lines were phenotyped as seven panels at Agua Fria, Mexico between the 2013–2014 and 2019–2020 crop cycles. We identified 214 significant spot blotch associated GBS markers in all the panels, among which only 96 were significant in more than one panel, indicating a strong environmental effect on the trait and highlights the need for multiple phenotypic evaluations to identify lines with stable spot blotch resistance. The 96 consistent GBS markers were on chromosomes 1A, 1B, 1D, 2A, 3B, 4A, 5B, 5D, 6B, 7A, 7B, and 7D, including markers possibly linked to the Lr46, Sb1, Sb2 and Sb3 genes. We also report the association of the 2NS translocation from Aegilops ventricosa with spot blotch resistance in some environments. Moreover, the spot blotch favorable alleles at the 2NS translocation and two markers on chromosome 3BS (3B_2280114 and 3B_5601689) were associated with increased grain yield evaluated at several environments in Mexico and India, implying that selection for favorable alleles at these loci could enable simultaneous improvement for high grain yield and spot blotch resistance. Furthermore, a significant relationship between the percentage of favorable alleles in the lines and their spot blotch response was observed, which taken together with the multiple minor effect loci identified to be associated with spot blotch in this study, indicate quantitative genetic control of resistance. Overall, the results presented here have extended our knowledge on the genetic basis of spot blotch resistance in bread wheat and further efforts to improve genetic resistance to the disease are needed for reducing current and future losses under climate change.