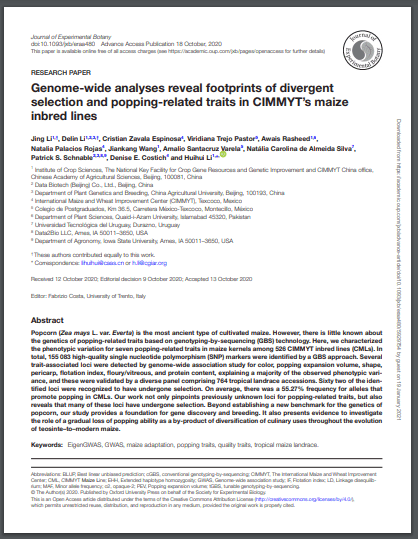 Popcorn (Zea mays L. var. Everta) is the most ancient type of cultivated maize. However, there is little known about the genetics of popping-related traits based on genotyping-by-sequencing (GBS) technology. Here, we characterized the phenotypic variation for seven popping-related traits in maize kernels among 526 CIMMYT inbred lines (CMLs). In total, 155 083 high-quality single nucleotide polymorphism (SNP) markers were identified by a GBS approach. Several trait-associated loci were detected by genome-wide association study for color, popping expansion volume, shape, pericarp, flotation index, floury/vitreous, and protein content, explaining a majority of the observed phenotypic variance, and these were validated by a diverse panel comprising 764 tropical landrace accessions. Sixty two of the identified loci were recognized to have undergone selection. On average, there was a 55.27% frequency for alleles that promote popping in CMLs. Our work not only pinpoints previously unknown loci for popping-related traits, but also reveals that many of these loci have undergone selection. Beyond establishing a new benchmark for the genetics of popcorn, our study provides a foundation for gene discovery and breeding. It also presents evidence to investigate the role of a gradual loss of popping ability as a by-product of diversification of culinary uses throughout the evolution of teosinte–to–modern maize.