Genetic variability, stability and heritability for quality and yield characteristics in provitamin A cassava varieties 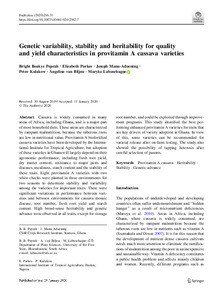 Genetic variability, stability and heritability for quality and yield characteristics in provitamin A cassava varieties
Peprah, B.B.; Parkes, E.; Manu-Aduening, J.; Kulakow, P.; van Biljon, A.; Labuschagne, M.
Cassava is widely consumed in many areas of Africa, including Ghana, and is a major part of most household diets. These areas are characterized by rampant malnutrition, because the tuberous roots are low in nutritional value. Provitamin A biofortified cassava varieties have been developed by the International Institute for Tropical Agriculture, but adoption of these varieties in Ghana will largely depend on their agronomic performance, including fresh root yield, dry matter content, resistance to major pests and diseases, mealiness, starch content and the stability of these traits. Eight provitamin A varieties with two white checks were planted in three environments for two seasons to determine stability and variability among the varieties for important traits. There were significant variations in performance between varieties and between environments for cassava mosaic disease, root number, fresh root yield and starch content. High broad-sense heritability and genetic advance were observed in all traits, except for storage root number, and could be exploited through improvement programs. This study identified the best performing enhanced provitamin A varieties for traits that are key drivers of variety adoption in Ghana. In view of this, some varieties can be recommended for varietal release after on-farm testing. The study also showed the possibility of tapping heterosis after careful selection of parents.
Open Access Article; Published online: 25 Jan 2020