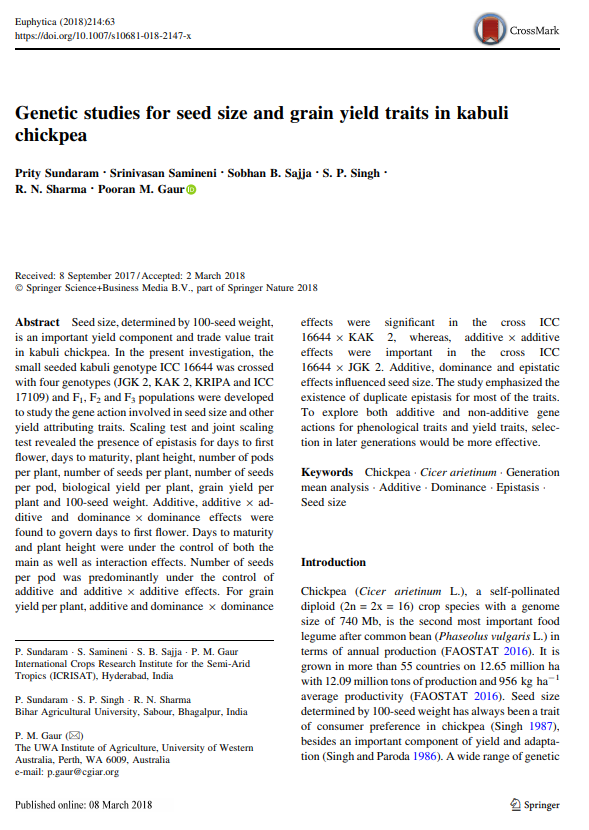 Seed size, determined by 100-seed weight, is an important yield component and trade value trait in kabuli chickpea. In the present investigation, the small seeded kabuli genotype ICC 16644 was crossed with four genotypes (JGK 2, KAK 2, KRIPA and ICC 17109) and F1, F2 and F3 populations were developed to study the gene action involved in seed size and other yield attributing traits. Scaling test and joint scaling test revealed the presence of epistasis for days to first flower, days to maturity, plant height, number of pods per plant, number of seeds per plant, number of seeds per pod, biological yield per plant, grain yield per plant and 100-seed weight. Additive, additive × additive and dominance × dominance effects were found to govern days to first flower. Days to maturity and plant height were under the control of both the main as well as interaction effects. Number of seeds per pod was predominantly under the control of additive and additive × additive effects. For grain yield per plant, additive and dominance × dominance effects were significant in the cross ICC 16644 × KAK 2, whereas, additive × additive effects were important in the cross ICC 16644 × JGK 2. Additive, dominance and epistatic effects influenced seed size. The study emphasized the existence of duplicate epistasis for most of the traits. To explore both additive and non-additive gene actions for phenological traits and yield traits, selection in later generations would be more effective.