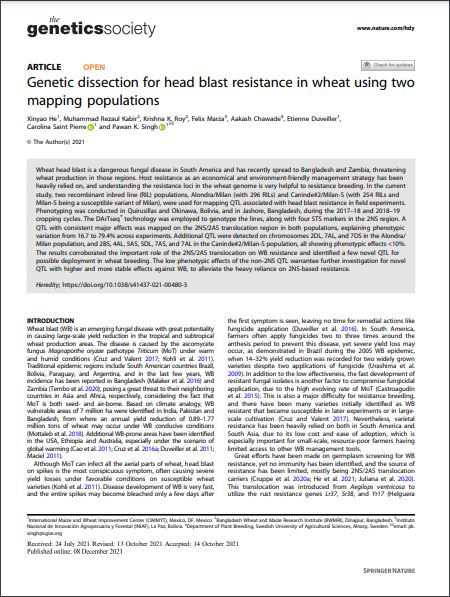 Wheat head blast is a dangerous fungal disease in South America and has recently spread to Bangladesh and Zambia, threatening wheat production in those regions. Host resistance as an economical and environment-friendly management strategy has been heavily relied on, and understanding the resistance loci in the wheat genome is very helpful to resistance breeding. In the current study, two recombinant inbred line (RIL) populations, Alondra/Milan (with 296 RILs) and Caninde#2/Milan-S (with 254 RILs and Milan-S being a susceptible variant of Milan), were used for mapping QTL associated with head blast resistance in field experiments. Phenotyping was conducted in Quirusillas and Okinawa, Bolivia, and in Jashore, Bangladesh, during the 2017–18 and 2018–19 cropping cycles. The DArTseq® technology was employed to genotype the lines, along with four STS markers in the 2NS region. A QTL with consistent major effects was mapped on the 2NS/2AS translocation region in both populations, explaining phenotypic variation from 16.7 to 79.4% across experiments. Additional QTL were detected on chromosomes 2DL, 7AL, and 7DS in the Alondra/Milan population, and 2BS, 4AL, 5AS, 5DL, 7AS, and 7AL in the Caninde#2/Milan-S population, all showing phenotypic effects <10%. The results corroborated the important role of the 2NS/2AS translocation on WB resistance and identified a few novel QTL for possible deployment in wheat breeding. The low phenotypic effects of the non-2NS QTL warrantee further investigation for novel QTL with higher and more stable effects against WB, to alleviate the heavy reliance on 2NS-based resistance.