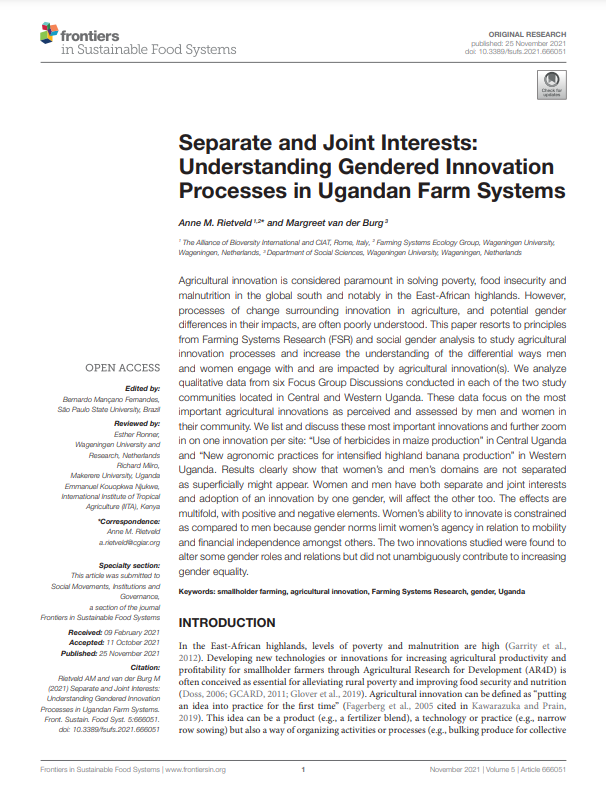 Agricultural innovation is considered paramount in solving poverty, food insecurity and malnutrition in the global south and notably in the East-African highlands. However, processes of change surrounding innovation in agriculture, and potential gender differences in their impacts, are often poorly understood. This paper resorts to principles from Farming Systems Research (FSR) and social gender analysis to study agricultural innovation processes and increase the understanding of the differential ways men and women engage with and are impacted by agricultural innovation(s). We analyze qualitative data from six Focus Group Discussions conducted in each of the two study communities located in Central and Western Uganda.

These data focus on the most important agricultural innovations as perceived and assessed by men and women in their community. We list and discuss these most important innovations and further zoom in on one innovation per site: “Use of herbicides in maize production” in Central Uganda and “New agronomic practices for intensified highland banana production” in Western Uganda. Results clearly show that women’s and men’s domains are not separated as superficially might appear. Women and men have both separate and joint interests and adoption of an innovation by one gender, will affect the other too. The effects are multifold, with positive and negative elements. Women’s ability to innovate is constrained as compared to men because gender norms limit women’s agency in relation to mobility and financial independence amongst others. The two innovations studied were found to alter some gender roles and relations but did not unambiguously contribute to increasing gender equality.