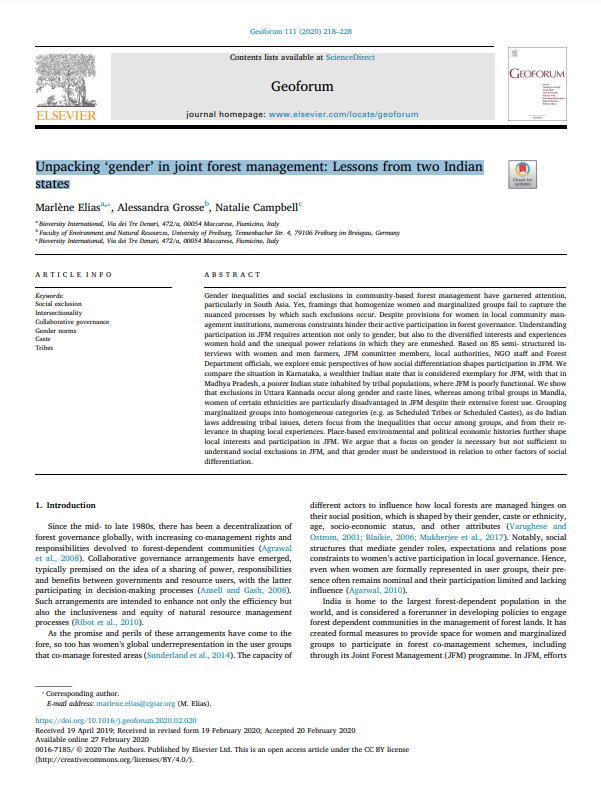 Gender inequalities and social exclusions in community-based forest management have garnered attention, particularly in South Asia. Yet, framings that homogenize women and marginalized groups fail to capture the nuanced processes by which such exclusions occur.

Despite provisions for women in local community management institutions, numerous constraints hinder their active participation in forest governance. Understanding participation in JFM requires attention not only to gender, but also to the diversified interests and experiences women hold and the unequal power relations in which they are enmeshed. Based on 85 semi- structured interviews with women and men farmers, JFM committee members, local authorities, NGO staff and Forest Department officials, we explore emic perspectives of how social differentiation shapes participation in JFM. We compare the situation in Karnataka, a wealthier Indian state that is considered exemplary for JFM, with that in Madhya Pradesh, a poorer Indian state inhabited by tribal populations, where JFM is poorly functional.

We show that exclusions in Uttara Kannada occur along gender and caste lines, whereas among tribal groups in Mandla, women of certain ethnicities are particularly disadvantaged in JFM despite their extensive forest use. Grouping marginalized groups into homogeneous categories (e.g. as Scheduled Tribes or Scheduled Castes), as do Indian laws addressing tribal issues, deters focus from the inequalities that occur among groups, and from their relevance in shaping local experiences. Place-based environmental and political economic histories further shape local interests and participation in JFM. We argue that a focus on gender is necessary but not sufficient to understand social exclusions in JFM, and that gender must be understood in relation to other factors of social differentiation.