Gender differences in nutritional intake among rural-urban migrants in China 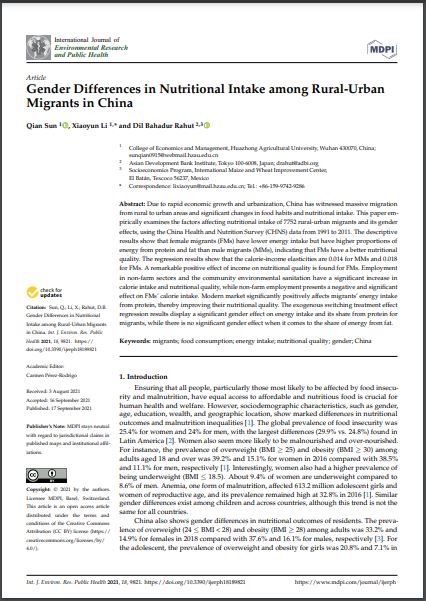 Due to rapid economic growth and urbanization, China has witnessed massive migration from rural to urban areas and significant changes in food habits and nutritional intake. This paper empirically examines the factors affecting nutritional intake of 7752 rural-urban migrants and its gender effects, using the China Health and Nutrition Survey (CHNS) data from 1991 to 2011. The descriptive results show that female migrants (FMs) have lower energy intake but have higher proportions of energy from protein and fat than male migrants (MMs), indicating that FMs have a better nutritional quality. The regression results show that the calorie-income elasticities are 0.014 for MMs and 0.018 for FMs. A remarkable positive effect of income on nutritional quality is found for FMs. Employment in non-farm sectors and the community environmental sanitation have a significant increase in calorie intake and nutritional quality, while non-farm employment presents a negative and significant effect on FMs’ calorie intake. Modern market significantly positively affects migrants’ energy intake from protein, thereby improving their nutritional quality. The exogenous switching treatment effect regression results display a significant gender effect on energy intake and its share from protein for migrants, while there is no significant gender effect when it comes to the share of energy from fat.