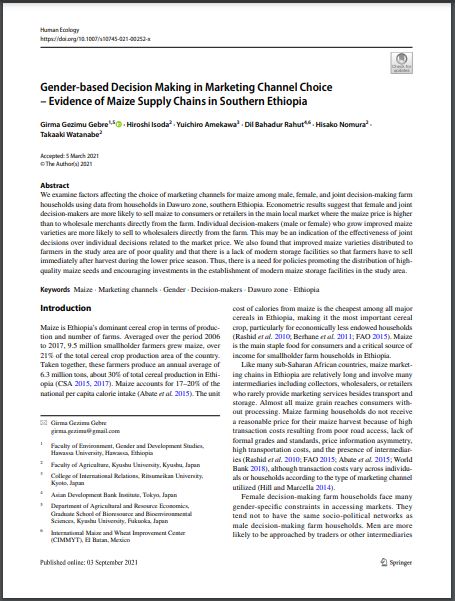 We examine factors affecting the choice of marketing channels for maize among male, female, and joint decision-making farm households using data from households in Dawuro zone, southern Ethiopia. Econometric results suggest that female and joint decision-makers are more likely to sell maize to consumers or retailers in the main local market where the maize price is higher than to wholesale merchants directly from the farm. Individual decision-makers (male or female) who grow improved maize varieties are more likely to sell to wholesalers directly from the farm. This may be an indication of the effectiveness of joint decisions over individual decisions related to the market price. We also found that improved maize varieties distributed to farmers in the study area are of poor quality and that there is a lack of modern storage facilities so that farmers have to sell immediately after harvest during the lower price season. Thus, there is a need for policies promoting the distribution of high-quality maize seeds and encouraging investments in the establishment of modern maize storage facilities in the study area.