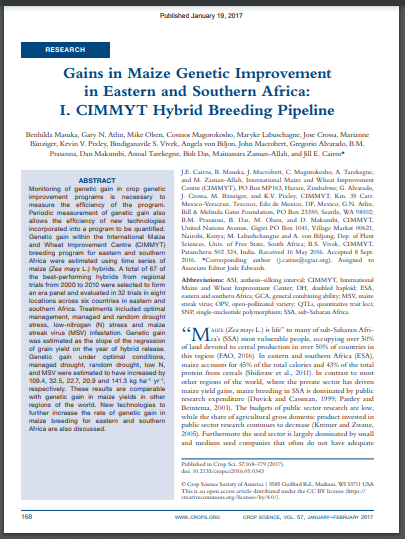 Monitoring of genetic gain in crop genetic improvement programs is necessary to measure the efficiency of the program. Periodic measurement of genetic gain also allows the efficiency of new technologies incorporated into a program to be quantified. Genetic gain within the International Maize and Wheat Improvement Centre (CIMMYT) breeding program for eastern and southern Africa were estimated using time series of maize (Zea mays L.) hybrids. A total of 67 of the best-performing hybrids from regional trials from 2000 to 2010 were selected to form an era panel and evaluated in 32 trials in eight locations across six countries in eastern and southern Africa. Treatments included optimal management, managed and random drought stress, low-nitrogen (N) stress and maize streak virus (MSV) infestation. Genetic gain was estimated as the slope of the regression of grain yield on the year of hybrid release. Genetic gain under optimal conditions, managed drought, random drought, low N, and MSV were estimated to have increased by 109.4, 32.5, 22.7, 20.9 and 141.3 kg ha−1 yr−1, respectively. These results are comparable with genetic gain in maize yields in other regions of the world. New technologies to further increase the rate of genetic gain in maize breeding for eastern and southern Africa are also discussed.