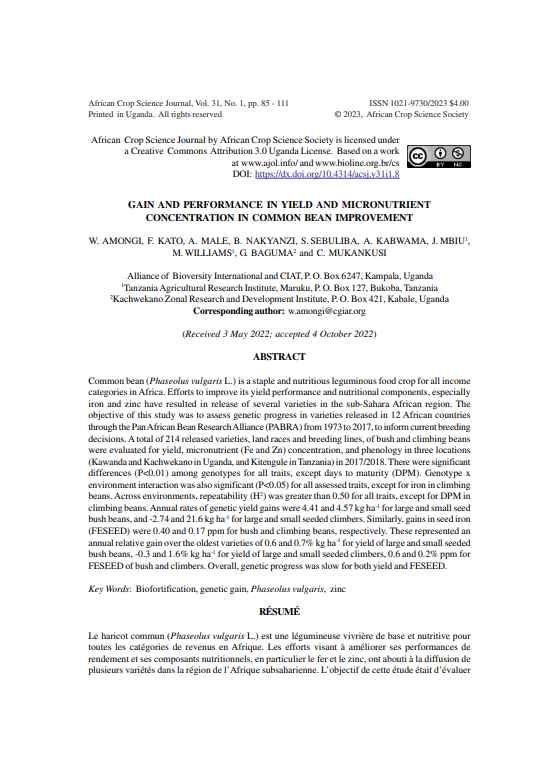 Common bean (Phaseolus vulgaris L.) is a staple and nutritious leguminous food crop for all income
categories in Africa. Efforts to improve its yield performance and nutritional components, especially
Iron and zinc have resulted in the release of several varieties in the sub-Saharan African region. The
objective of this study was to assess genetic progress in varieties released in 12 African countries
through the Pan African Bean Research Alliance (PABRA) from 1973 to 2017, to inform current breeding decisions. A total of 214 released varieties, land races and breeding lines, of bush and climbing beans were evaluated for yield, micronutrient (Fe and Zn) concentration, and phenology in three locations (Kawanda and Kachwekano in Uganda, and Kitengule in Tanzania) in 2017–2018. There were significant differences (P 0.01) among genotypes for all traits except days to maturity (DPM). Genotype x environment interaction was also significant (P<0.05) for all assessed traits, except for iron in climbing beans. Across environments, repeatability (H2) was greater than 0.50 for all traits, except for DPM in climbing beans. Annual rates of genetic yield gains were 4.41 and 4.57 kg ha-1 for large and small seed bush beans, and -2.74 and 21.6 kg ha-1 for large and small seeded climbers. Similarly, gains in seed iron (FESEED) were 0.40 and 0.17 ppm for bush and climbing beans, respectively. These represented an annual relative gain over the oldest varieties of 0.6 and 0.7% kg ha-1 for yield of large and small seeded bush beans, -0.3 and 1.6% kg ha-1 for yield of large and small seeded climbers, 0.6 and 0.2% ppm for FESEED of bush and climbers. Overall, genetic progress was slow for both yield and FESEED.