Fungal pathogens associated with crown and root rot of wheat in Central, Eastern, and Southeastern Kazakhstan 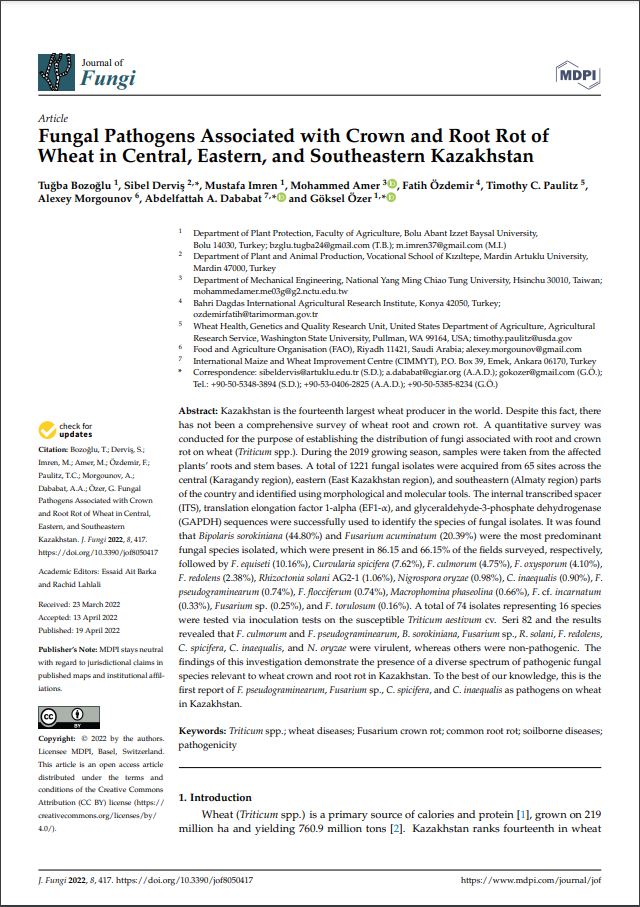 Kazakhstan is the fourteenth largest wheat producer in the world. Despite this fact, there has not been a comprehensive survey of wheat root and crown rot. A quantitative survey was conducted for the purpose of establishing the distribution of fungi associated with root and crown rot on wheat (Triticum spp.). During the 2019 growing season, samples were taken from the affected plants’ roots and stem bases. A total of 1221 fungal isolates were acquired from 65 sites across the central (Karagandy region), eastern (East Kazakhstan region), and southeastern (Almaty region) parts of the country and identified using morphological and molecular tools. The internal transcribed spacer (ITS), translation elongation factor 1-alpha (EF1-α), and glyceraldehyde-3-phosphate dehydrogenase (GAPDH) sequences were successfully used to identify the species of fungal isolates. It was found that Bipolaris sorokiniana (44.80%) and Fusarium acuminatum (20.39%) were the most predominant fungal species isolated, which were present in 86.15 and 66.15% of the fields surveyed, respectively, followed by F. equiseti (10.16%), Curvularia spicifera (7.62%), F. culmorum (4.75%), F. oxysporum (4.10%), F. redolens (2.38%), Rhizoctonia solani AG2-1 (1.06%), Nigrospora oryzae (0.98%), C. inaequalis (0.90%), F. pseudograminearum (0.74%), F. flocciferum (0.74%), Macrophomina phaseolina (0.66%), F. cf. incarnatum (0.33%), Fusarium sp. (0.25%), and F. torulosum (0.16%). A total of 74 isolates representing 16 species were tested via inoculation tests on the susceptible Triticum aestivum cv. Seri 82 and the results revealed that F. culmorum and F. pseudograminearum, B. sorokiniana, Fusarium sp., R. solani, F. redolens, C. spicifera, C. inaequalis, and N. oryzae were virulent, whereas others were non-pathogenic. The findings of this investigation demonstrate the presence of a diverse spectrum of pathogenic fungal species relevant to wheat crown and root rot in Kazakhstan. To the best of our knowledge, this is the first report of F. pseudograminearum, Fusarium sp., C. spicifera, and C. inaequalis as pathogens on wheat in Kazakhstan.