Functional Dissection of the Chickpea (Cicer arietinum L.) Stay-Green Phenotype Associated with Molecular Variation at an Ortholog of Mendel’s I Gene for Cotyledon Color: Implications for Crop Production and Carotenoid Biofortification 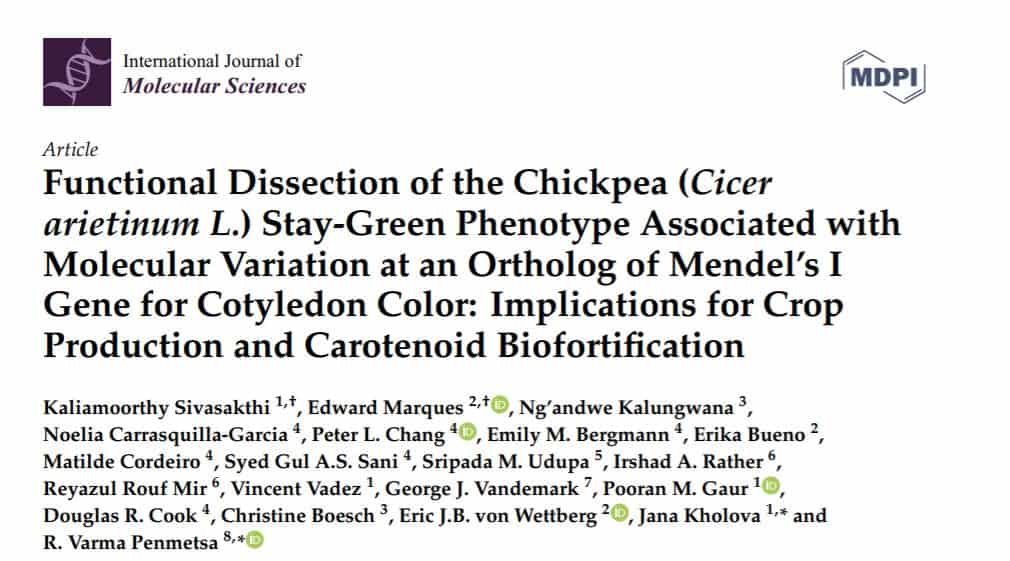 “Stay-green” crop phenotypes have been shown to impact drought tolerance and nutritional content of several crops. We aimed to genetically describe and functionally dissect the particular stay-green phenomenon found in chickpeas with a green cotyledon color of mature dry seed and investigate its potential use for improvement of chickpea environmental adaptations and nutritional value. We examined 40 stay-green accessions and a set of 29 BC2F4-5 stay-green introgression lines using a stay-green donor parent ICC 16340 and two Indian elite cultivars (KAK2, JGK1) as recurrent parents. Genetic studies of segregating populations indicated that the green cotyledon trait is controlled by a single recessive gene that is invariantly associated with the delayed degreening (extended chlorophyll retention). We found that the chickpea ortholog of Mendel’s I locus of garden pea, encoding a SGR protein as very likely to underlie the persistently green cotyledon color phenotype of chickpea. Further sequence characterization of this chickpea ortholog CaStGR1 (CaStGR1, for carietinum stay-green gene 1) revealed the presence of five different molecular variants (alleles), each of which is likely a loss-of-function of the chickpea protein (CaStGR1) involved in chlorophyll catabolism. We tested the wild type and green cotyledon lines for components of adaptations to dry environments and traits linked to agronomic performance in different experimental systems and different levels of water availability. We found that the plant processes linked to disrupted CaStGR1 gene did not functionality affect transpiration efficiency or water usage. Photosynthetic pigments in grains, including provitaminogenic carotenoids important for human nutrition, were 2–3-fold higher in the stay-green type. Agronomic performance did not appear to be correlated with the presence/absence of the stay-green allele. We conclude that allelic variation in chickpea CaStGR1 does not compromise traits linked to environmental adaptation and agronomic performance, and is a promising genetic technology for biofortification of provitaminogenic carotenoids in chickpea.