From plot to scale: ex-ante assessment of conservation agriculture in Zambia 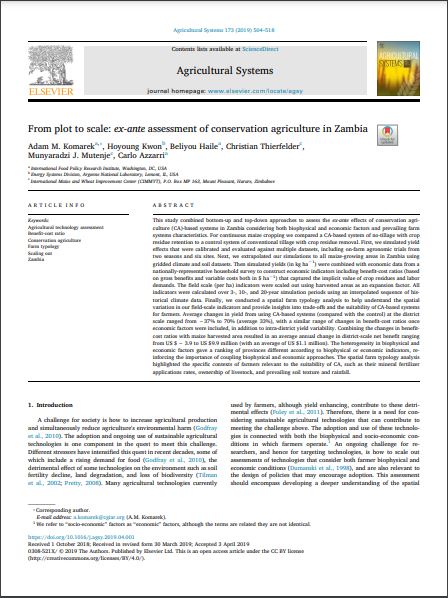 This study combined bottom-up and top-down approaches to assess the ex-ante effects of conservation agriculture (CA)-based systems in Zambia considering both biophysical and economic factors and prevailing farm systems characteristics. For continuous maize cropping we compared a CA-based system of no-tillage with crop residue retention to a control system of conventional tillage with crop residue removal. First, we simulated yield effects that were calibrated and evaluated against multiple datasets, including on-farm agronomic trials from two seasons and six sites. Next, we extrapolated our simulations to all maize-growing areas in Zambia using gridded climate and soil datasets. Then simulated yields (in kg ha−1) were combined with economic data from a nationally-representative household survey to construct economic indicators including benefit-cost ratios (based on gross benefits and variable costs both in $ ha−1) that captured the implicit value of crop residues and labor demands. The field scale (per ha) indicators were scaled out using harvested areas as an expansion factor. All indicators were calculated over 3-, 10-, and 20-year simulation periods using an interpolated sequence of historical climate data. Finally, we conducted a spatial farm typology analysis to help understand the spatial variation in our field-scale indicators and provide insights into trade-offs and the suitability of CA-based systems for farmers. Average changes in yield from using CA-based systems (compared with the control) at the district scale ranged from −37% to 70% (average 33%), with a similar range of changes in benefit-cost ratios once economic factors were included, in addition to intra-district yield variability. Combining the changes in benefit-cost ratios with maize harvested area resulted in an average annual change in district-scale net benefit ranging from US $ − 3.9 to US $9.9 million (with an average of US $1.1 million). The heterogeneity in biophysical and economic factors gave a ranking of provinces different according to biophysical or economic indicators, reinforcing the importance of coupling biophysical and economic approaches. The spatial farm typology analysis highlighted the specific contexts of farmers relevant to the suitability of CA, such as their mineral fertilizer applications rates, ownership of livestock, and prevailing soil texture and rainfall.