Food system and water–energy–biodiversity nexus in Nepal: a review 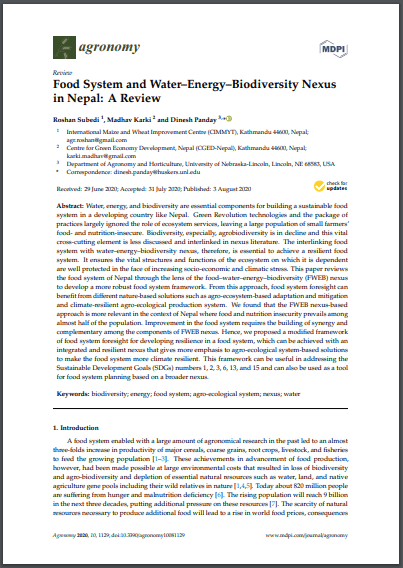 Water, energy, and biodiversity are essential components for building a sustainable food system in a developing country like Nepal. Green Revolution technologies and the package of practices largely ignored the role of ecosystem services, leaving a large population of small farmers’ food- and nutrition-insecure. Biodiversity, especially, agrobiodiversity is in decline and this vital cross-cutting element is less discussed and interlinked in nexus literature. The interlinking food system with water–energy–biodiversity nexus, therefore, is essential to achieve a resilient food system. It ensures the vital structures and functions of the ecosystem on which it is dependent are well protected in the face of increasing socio-economic and climatic stress. This paper reviews the food system of Nepal through the lens of the food–water–energy–biodiversity (FWEB) nexus to develop a more robust food system framework. From this approach, food system foresight can benefit from different nature-based solutions such as agro-ecosystem-based adaptation and mitigation and climate-resilient agro-ecological production system. We found that the FWEB nexus-based approach is more relevant in the context of Nepal where food and nutrition insecurity prevails among almost half of the population. Improvement in the food system requires the building of synergy and complementary among the components of FWEB nexus. Hence, we proposed a modified framework of food system foresight for developing resilience in a food system, which can be achieved with an integrated and resilient nexus that gives more emphasis to agro-ecological system-based solutions to make the food system more climate resilient. This framework can be useful in addressing the Sustainable Development Goals (SDGs) numbers 1, 2, 3, 6, 13, and 15 and can also be used as a tool for food system planning based on a broader nexus.