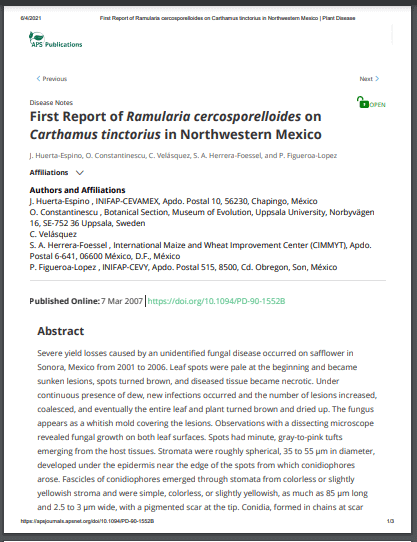 Severe yield losses caused by an unidentified fungal disease occurred on safflower in Sonora, Mexico from 2001 to 2006. Leaf spots were pale at the beginning and became sunken lesions, spots turned brown, and diseased tissue became necrotic. Under continuous presence of dew, new infections occurred and the number of lesions increased, coalesced, and eventually the entire leaf and plant turned brown and dried up. The fungus appears as a whitish mold covering the lesions. Observations with a dissecting microscope revealed fungal growth on both leaf surfaces. Spots had minute, gray-to-pink tufts emerging from the host tissues. Stromata were roughly spherical, 35 to 55 μm in diameter, developed under the epidermis near the edge of the spots from which conidiophores arose. Fascicles of conidiophores emerged through stomata from colorless or slightly yellowish stroma and were simple, colorless, or slightly yellowish, as much as 85 μm long and 2.5 to 3 μm wide, with a pigmented scar at the tip. Conidia, formed in chains at scar sites on conidiophores, were colorless, obclavate, 0 to 1 septate, approximately 24 to 32 μm long, and 4.5 to 7 μm wide at the broadest part with a pigmented scar either at the base or at both ends. On the basis of symptoms and fungal morphology, the pathogen was identified as Ramularia cercosporelloides U. Braun & Crous (=Cercosporella carthami) (1). Seven specimens were deposited at the Uppsala University Herbarium as Nos. UPS F-119998 to 120004. Conidia were transferred to water agar plates from symptomatic leaves after 8 days in a humid chamber. Ten single conidia were plated onto a Septoria tritici medium (4 g each of malt extract, yeast extract, and sucrose, and 18 g of agar per liter of water). Colonies of the fungus were white-to-light pink with irregular margins and very slow in growth. Inoculum was produced by transferring 2 ml of distilled water containing conidia onto petri plates filled with Septoria medium. Plates were incubated at 18°C for 12 days. Water suspension was amended with two drops of Tween 20 per liter of inoculum. Pathogenicity of five isolates was confirmed by spraying a suspension of 1.0 × 105 conidia/ml onto five pots of four direct-seeded adult plants of cv. S-518 per isolate. Plants were kept in a dew chamber (20°C) for 48 h under 16 h of darkness and 8 h of light and then in a greenhouse (20 to 24°C). After 2 weeks, leaves developed the characteristic spots, and R. cercosporelloides was isolated from symptomatic tissue. To our knowledge, this is the first report of R. cercosporelloides on safflower, not only in Mexico, but also on the American continent.