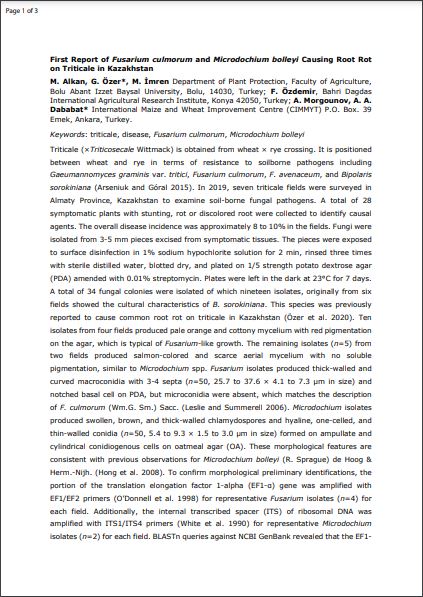 Triticale (×Triticosecale Wittmack) is obtained from wheat × rye crossing. It is positioned between wheat and rye in terms of resistance to soilborne pathogens including Gaeumannomyces graminis var. tritici, Fusarium culmorum, F. avenaceum, and Bipolaris sorokiniana (Arseniuk and Góral 2015). In 2019, seven triticale fields were surveyed in Almaty Province, Kazakhstan to examine soil-borne fungal pathogens. A total of 28 symptomatic plants with stunting, rot or discolored root were collected to identify causal agents. The overall disease incidence was approximately 8 to 10% in the fields. Fungi were isolated from 3-5 mm pieces excised from symptomatic tissues. The pieces were exposed to surface disinfection in 1% sodium hypochlorite solution for 2 min, rinsed three times with sterile distilled water, blotted dry, and plated on 1/5 strength potato dextrose agar (PDA) amended with 0.01% streptomycin. Plates were left in the dark at 23°C for 7 days. A total of 34 fungal colonies were isolated of which nineteen isolates, originally from six fields showed the cultural characteristics of B. sorokiniana. This species was previously reported to cause common root rot on triticale in Kazakhstan (Özer et al. 2020). Ten isolates from four fields produced pale orange and cottony mycelium with red pigmentation on the agar, which is typical of Fusarium-like growth. The remaining isolates (n=5) from two fields produced salmon-colored and scarce aerial mycelium with no soluble pigmentation, similar to Microdochium spp. Fusarium isolates produced thick-walled and curved macroconidia with 3-4 septa (n=50, 25.7 to 37.6 × 4.1 to 7.3 μm in size) and notched basal cell on PDA, but microconidia were absent, which matches the description of F. culmorum (Wm.G. Sm.) Sacc. (Leslie and Summerell 2006). Microdochium isolates produced swollen, brown, and thick-walled chlamydospores and hyaline, one-celled, and thin-walled conidia (n=50, 5.4 to 9.3 × 1.5 to 3.0 μm in size) formed on ampullate and cylindrical conidiogenous cells on oatmeal agar (OA). These morphological features are consistent with previous observations for Microdochium bolleyi (R. Sprague) de Hoog & Herm.-Nijh. (Hong et al. 2008). To confirm morphological preliminary identifications, the portion of the translation elongation factor 1-alpha (EF1-α) gene was amplified with EF1/EF2 primers (O’Donnell et al. 1998) for representative Fusarium isolates (n=4) for each field. Additionally, the internal transcribed spacer (ITS) of ribosomal DNA was amplified with ITS1/ITS4 primers (White et al. 1990) for representative Microdochium isolates (n=2) for each field. BLASTn queries against NCBI GenBank revealed that the EF1-α sequences of Fusarium isolates (MW311081-MW311084) shared 100% identity with F. culmorum strain CBS 110262 (KT008433). The ITS sequences of M. bolleyi isolates (MW301448-MW301449) matched that of M. bolleyi strain CBS 137.64 (AM502264) with 100% sequence similarity. Pathogenicity test was conducted on pregerminated seeds of triticale cv. Balausa. A plastic pot (17 cm height, 9 cm in diam) was filled with a sterile mixture of vermiculite, peat, and soil (1:1:1, v/v/v). Mycelial plugs (1 cm in diam) were cut from the margin of a growing culture of representative isolates (Kaz_Fus123 and Kaz_Mb01) and placed onto the mixture in the pot. A sterile agar plug was employed as a control treatment. One pregerminated seed was put on the plug and covered with the mixture. The pots were transferred to a growth chamber set at 23 ± 2°C and a photoperiod of 14 hours. The experiment was performed twice using 5 replication pots per isolate. Four weeks after inoculation, discoloration of the crown was observed on all the inoculated roots, whereas no symptoms were observed on the control plants. Koch’s postulates were fulfilled by reisolating and identifying the pathogen based on the morphology described above. This is the first report of M. bolleyi and F. culmorum causing root rot on triticale in Kazakhstan. Although B. sorokiniana is the most primary pathogen that may limit yield in the production of triticale in Kazakhstan, F. culmorum and M. bolleyi have been found to be less frequent and less aggressive pathogens, respectively. Further studies are needed to better understand the potential distribution and impact of these pathogens on triticale.