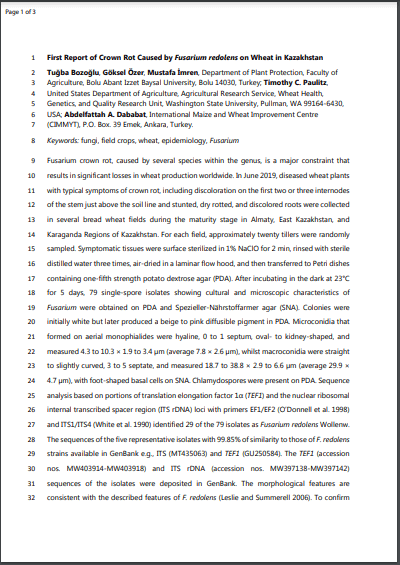 Fusarium crown rot, caused by several species within the genus, is a major constraint that results in significant losses in wheat production worldwide. In June 2019, diseased wheat plants with typical symptoms of crown rot, including discoloration on the first two or three internodes of the stem just above the soil line and stunted, dry rotted, and discolored roots were collected in several bread wheat fields during the maturity stage in Almaty, East Kazakhstan, and Karaganda Regions of Kazakhstan. For each field, approximately twenty tillers were randomly sampled. Symptomatic tissues were surface sterilized in 1% NaClO for 2 min, rinsed with sterile distilled water three times, air-dried in a laminar flow hood, and then transferred to Petri dishes containing one-fifth strength potato dextrose agar (PDA). After incubating in the dark at 23°C for 5 days, 79 single-spore isolates showing cultural and microscopic characteristics of Fusarium were obtained on PDA and Spezieller-Nährstoffarmer agar (SNA). Colonies were initially white but later produced a beige to pink diffusible pigment in PDA. Microconidia that formed on aerial monophialides were hyaline, 0 to 1 septum, oval- to kidney-shaped, and measured 4.3 to 10.3 × 1.9 to 3.4 µm (average 7.8 × 2.6 µm), whilst macroconidia were straight to slightly curved, 3 to 5 septate, and measured 18.7 to 38.8 × 2.9 to 6.6 µm (average 29.9 × 4.7 µm), with foot-shaped basal cells on SNA. Chlamydospores were present on PDA. Sequence analysis based on portions of translation elongation factor 1α (TEF1) and the nuclear ribosomal internal transcribed spacer region (ITS rDNA) loci with primers EF1/EF2 (O’Donnell et al. 1998) and ITS1/ITS4 (White et al. 1990) identified 29 of the 79 isolates as Fusarium redolens Wollenw. The sequences of the five representative isolates with 99.85% of similarity to those of F. redolens strains available in GenBank e.g., ITS (MT435063) and TEF1 (GU250584). The TEF1 (accession nos. MW403914-MW403918) and ITS rDNA (accession nos. MW397138-MW397142) sequences of the isolates were deposited in GenBank. The morphological features are consistent with the described features of F. redolens (Leslie and Summerell 2006). To confirm pathogenicity of the five isolates, five pre-germinated seeds of wheat cultivar Seri 82 were placed in a 9-cm-diameter pot filled with a sterile potting mix containing equal volumes of peat, vermiculite, and soil. An approximately 1-cm-diameter 7-day-old mycelial plug of each isolate was individually placed in contact with the seeds. Seeds were covered with the same potting mix, and then the pots were maintained for four weeks in a growth chamber at 23°C with a 12-h photoperiod. The experiment was conducted twice with three replicate 15-cm pots with 5 plants per pot. Controls were inoculated with sterile agar plugs using the same procedure. After four weeks, all the inoculated plants showed stunted growth with brown discoloration in most parts of the crown and roots, whereas no symptoms were observed in the control plants. The mean severity of the disease for each isolate was between 2.1 and 2.7 according to the scale of 1 to 5 described by Gebremariam et al. (2015). The pathogen was reisolated from crowns of diseased plants, but not from asymptomatic control tissues, and identified morphologically based on the methods described above, fulfilling Koch’s postulates. Although several morphological features are shared by F. oxysporum and F. redolens, Baayen et al. (2001) showed that these species could be easily distinguished using molecular data. The pathogen was previously reported as F. redolens associated with crown rot of wheat in Turkey (Gebremariam et al. 2015) and Saskatchewan, Canada (Taheri et al. 2011). The presence of F. redolens causing crown rot is confirmed in the six wheat fields surveyed in Kazakhstan, for the first time. This pathogen may pose a risk for wheat production, and further studies needed to determine the impact on the crop in Kazakhstan.