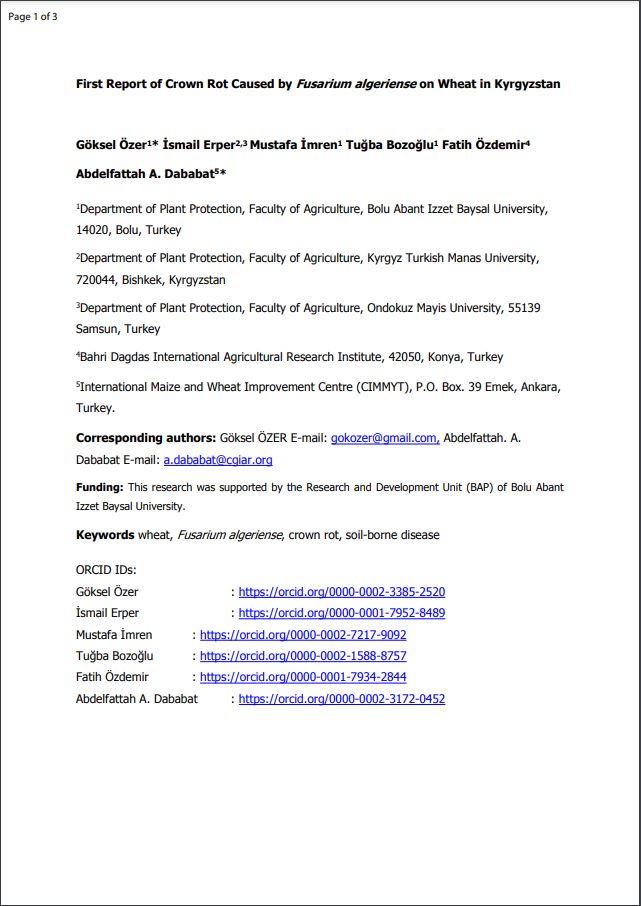 Fusarium crown rot of wheat is an economically important disease that leads to significant yield and quality losses, especially in many arid and semi-arid wheat-growing areas worldwide. In June 2020, winter wheat (Triticum aestivum L.) plants exhibiting crown rot symptoms were identified in a commercial field located in the Tokbay location (43.033719°N, 74.325623°E), Chuy Province, Kyrgyzstan. The diseased plants were stunted and had brown discoloration on internodes of the stem bases and roots. Disease incidence was about 3%. A total of 10 plants were sampled at the ripening stage from the field to identify the causal agent. Symptomatic tissues were excised, surface disinfected with 1% NaOCl, rinsed three times with distilled water, and placed on one-fifth strength potato dextrose agar (PDA) followed by incubation at 23°C in the dark for 5 days. A total of 8 Fusarium isolates were recovered from tissues and purified by the hyphal tips method onto fresh PDA and Spezieller-Nährstoffarmer agar (SNA) plates (Leslie and Summerell 2006). Sequence analysis of the translation elongation factor 1α (TEF1) and the RNA polymerase II beta subunit (RPB2) genes were performed with primers EF1 and EF2 (O’Donnell et al. 1998), and 5f2 (Reeb et al. 2004) and 7cr (Liu et al. 1999), respectively. The sequences of three isolates showed 100% identities with the corresponding sequences of the strain NRRL 66652 of Fusarium algeriense Laraba & O’Donnell (TEF1: MF120515 and RPB2: MF120504), and the sequences of a representative isolate (KyrFa01) were deposited in GenBank (TEF1: OM135603 and RPB2: OM135604). On PDA, fungal colonies were initially yellowish-white but gradually turned yellowish-brown. Ellipsoidal microconidia produced in false heads on monophialides were usually aseptate (8.30 ± 1.17 μm, n = 50) and occasionally one-septate (21.89 ± 2.01 μm, n = 50). Sporodochial macroconidia were mostly 3-4 septate measuring 43.41 ± 2.83 μm (n = 50), slightly curved and formed generally on monophialides on SNA. No chlamydospores formation was detected after 15 days on SNA or PDA. Morphological characteristics described above were consistent with the morphology of F. algeriense, as reported by Laraba et al. (2017). To confirm pathogenicity, seeds of wheat cultivar Seri 82, Fusarium crown rot susceptible, were treated in 1% NaOCl for 2 min, rinsed twice, and placed in plates containing a piece of sterile filter paper saturated with water to induce germination for 3 days. Five pregerminated seeds were placed on the soil surface for each 9-cm-diameter pot, which was filled with a sterile potting mix containing peat, vermiculite, and soil (1:1:1 by v/v/v). A 1-cm-diameter mycelial plug taken from the margin of actively growing colonies (PDA) of the representative isolate KyrFa01 was contacted with each seed, and then seeds were covered with the same potting mix. The seeds in control pots were treated with sterile PDA plugs. The experiment was conducted in a growth chamber in a completely randomized design with five replicated pots at 23°C with a 12-h photoperiod. Disease assessment was made after 4 weeks of fungal inoculation. The isolate KyrFa01 induced discoloration on the crown and root tissues of inoculated plants similar to those observed in the field-grown plants, whereas no symptoms were observed on plants grown in the control pots. The pathogen was successfully reisolated from the symptomatic tissues, confirming Koch’s postulates. To the best of our knowledge, this is the first report of crown rot caused by F. algeriense on wheat in Kyrgyzstan. Fusarium algeriense was firstly described within the Fusarium burgessii species complex by Laraba et al. (2017) as a crown rot pathogen of wheat in Algeria. The pathogen was secondly reported from wheat-growing areas in Azerbaijan (Özer et al. 2020a) and thirdly from Kyrgyzstan in this report. Özer et al. (2020b) confirmed the coexistence of this pathogen with other Fusarium species. The result warrants the need to further investigate the potential of this species in the Fusarium crown rot complex of wheat.