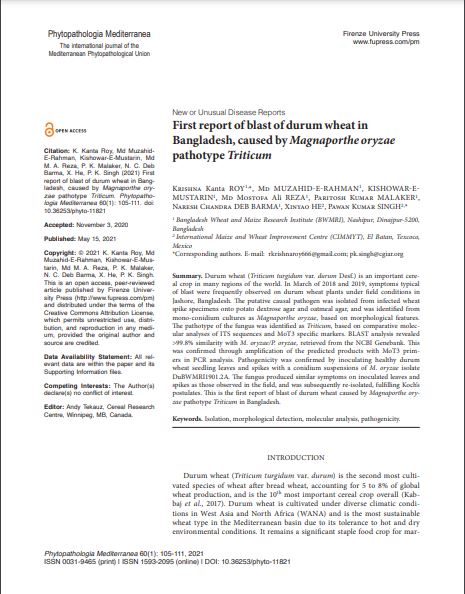 Durum wheat (Triticum turgidum var. durum Desf.) is an important cereal crop in many regions of the world. In March of 2018 and 2019, symptoms typical of blast were frequently observed on durum wheat plants under field conditions in Jashore, Bangladesh. The putative causal pathogen was isolated from infected wheat spike specimens onto potato dextrose agar and oatmeal agar, and was identified from mono-conidium cultures as Magnaporthe oryzae, based on morphological features. The pathotype of the fungus was identified as Triticum, based on comparative molecular analyses of ITS sequences and MoT3 specific markers. BLAST analysis revealed >99.8% similarity with M. oryzae/P. oryzae, retrieved from the NCBI Genebank. This was confirmed through amplification of the predicted products with MoT3 primers in PCR analysis. Pathogenicity was confirmed by inoculating healthy durum wheat seedling leaves and spikes with a conidium suspensions of M. oryzae isolate DuBWMRI1901.2A. The fungus produced similar symptoms on inoculated leaves and spikes as those observed in the field, and was subsequently re-isolated, fulfilling Koch’s postulates. This is the first report of blast of durum wheat caused by Magnaporthe ory-zae pathotype Triticum in Bangladesh.