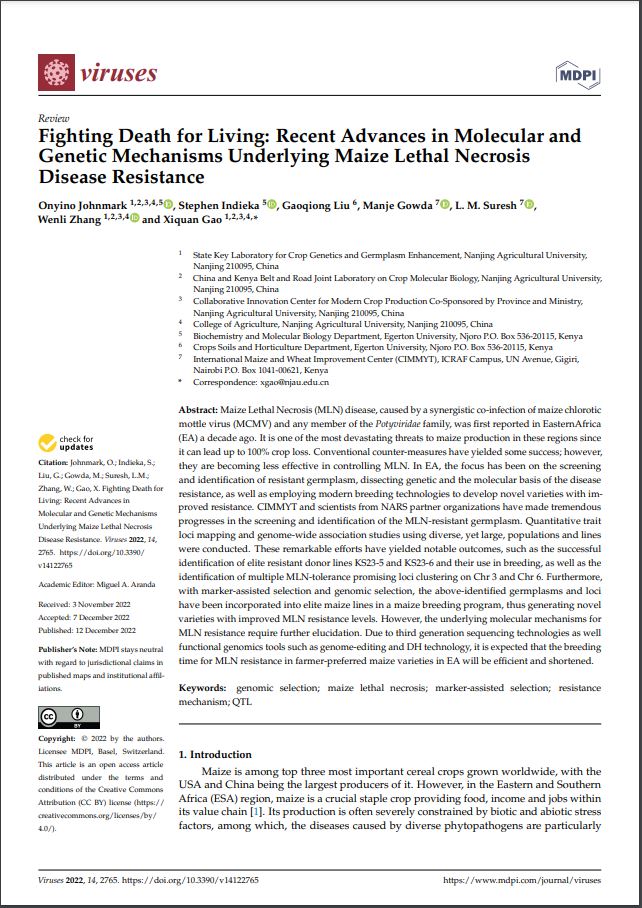 Maize Lethal Necrosis (MLN) disease, caused by a synergistic co-infection of maize chlorotic mottle virus (MCMV) and any member of the Potyviridae family, was first reported in EasternAfrica (EA) a decade ago. It is one of the most devastating threats to maize production in these regions since it can lead up to 100% crop loss. Conventional counter-measures have yielded some success; however, they are becoming less effective in controlling MLN. In EA, the focus has been on the screening and identification of resistant germplasm, dissecting genetic and the molecular basis of the disease resistance, as well as employing modern breeding technologies to develop novel varieties with improved resistance. CIMMYT and scientists from NARS partner organizations have made tremendous progresses in the screening and identification of the MLN-resistant germplasm. Quantitative trait loci mapping and genome-wide association studies using diverse, yet large, populations and lines were conducted. These remarkable efforts have yielded notable outcomes, such as the successful identification of elite resistant donor lines KS23-5 and KS23-6 and their use in breeding, as well as the identification of multiple MLN-tolerance promising loci clustering on Chr 3 and Chr 6. Furthermore, with marker-assisted selection and genomic selection, the above-identified germplasms and loci have been incorporated into elite maize lines in a maize breeding program, thus generating novel varieties with improved MLN resistance levels. However, the underlying molecular mechanisms for MLN resistance require further elucidation. Due to third generation sequencing technologies as well functional genomics tools such as genome-editing and DH technology, it is expected that the breeding time for MLN resistance in farmer-preferred maize varieties in EA will be efficient and shortened.