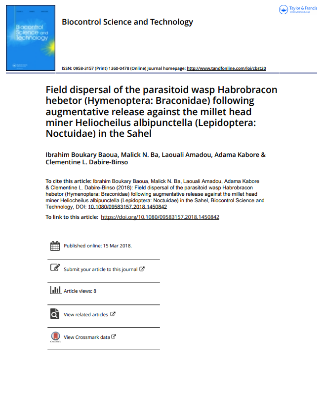 Pearl millet is one of the major staple food crops in Sub-Sahelian Africa, and the millet head miner (MHM) [Heliocheilus albipunctella] is its major pest, causing serious economic damage in the maturity period. We studied the dispersion patterns of the endogenous ectoparasitoid, Habrobracon hebetor (Hymenoptera: Braconidae), after augmentative releases in pearl millet fields for biological control of the MHM, in 2010 and 2011 in Burkina Faso and Niger. The parasitoids were released using 15 jute bags per release site. Parasitoid dispersion was indirectly monitored through weekly assessments of MHM parasitism by H. hebetor at different distances from release points (0, 3 and 5 km) and in control villages (15 km). Our findings indicate that the jute bags released approximately 900–1000 parasitoids per site over a period of three weeks. This initial parasitoid population led to higher parasitism of MHM larvae at the site of dissemination compared to farms at distances of 3 and 5 km. However, usually after five weeks, successive generations of H. hebetor dispersed up to 3 km, causing high levels of MHM larval mortality, which sometimes is similar to those of the release points. Based on these results, we recommend the release of parasitoids at sites spaced 3 km for timely and more efficient control of MHM populations.