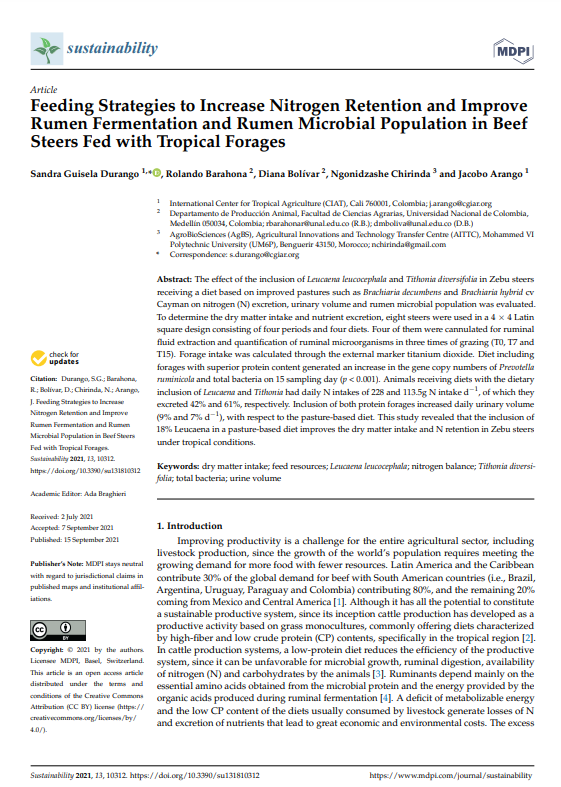 The effect of the inclusion of Leucaena leucocephala and Tithonia diversifolia in Zebu steers receiving a diet based on improved pastures such as Brachiaria decumbens and Brachiaria hybrid cv Cayman on nitrogen (N) excretion, urinary volume and rumen microbial population was evaluated. To determine the dry matter intake and nutrient excretion, eight steers were used in a 4 × 4 Latin square design consisting of four periods and four diets. Four of them were cannulated for ruminal fluid extraction and quantification of ruminal microorganisms in three times of grazing (T0, T7 and T15). Forage intake was calculated through the external marker titanium dioxide. Diet including forages with superior protein content generated an increase in the gene copy numbers of Prevotella ruminicola and total bacteria on 15 sampling day (p < 0.001). Animals receiving diets with the dietary inclusion of Leucaena and Tithonia had daily N intakes of 228 and 113.5g N intake d−1, of which they excreted 42% and 61%, respectively. Inclusion of both protein forages increased daily urinary volume (9% and 7% d−1), with respect to the pasture-based diet. This study revealed that the inclusion of 18% Leucaena in a pasture-based diet improves the dry matter intake and N retention in Zebu steers under tropical conditions.