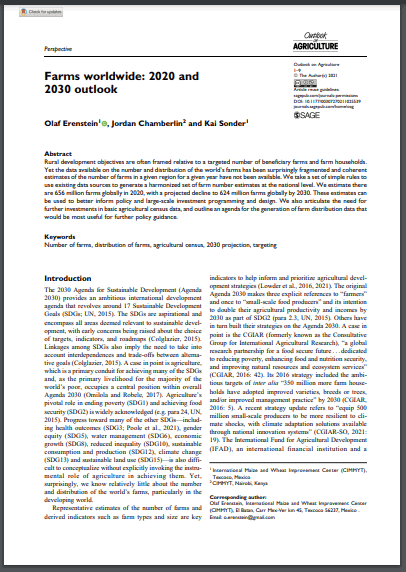 Rural development objectives are often framed relative to a targeted number of beneficiary farms and farm households. Yet the data available on the number and distribution of the world’s farms has been surprisingly fragmented and coherent estimates of the number of farms in a given region for a given year have not been available. We take a set of simple rules to use existing data sources to generate a harmonized set of farm number estimates at the national level. We estimate there are 656 million farms globally in 2020, with a projected decline to 624 million farms globally by 2030. These estimates can be used to better inform policy and large-scale investment programming and design. We also articulate the need for further investments in basic agricultural census data, and outline an agenda for the generation of farm distribution data that would be most useful for further policy guidance.