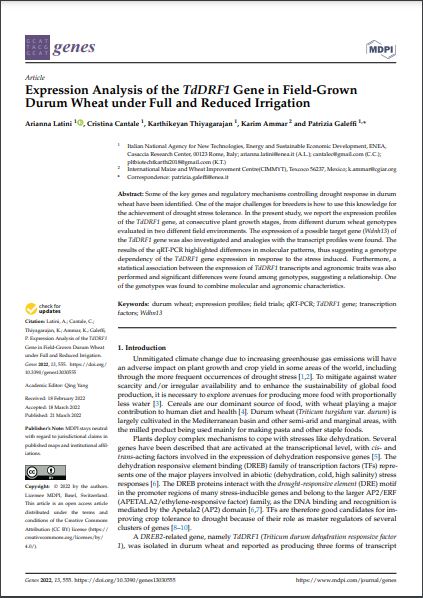 Some of the key genes and regulatory mechanisms controlling drought response in durum wheat have been identified. One of the major challenges for breeders is how to use this knowledge for the achievement of drought stress tolerance. In the present study, we report the expression profiles of the TdDRF1 gene, at consecutive plant growth stages, from different durum wheat genotypes evaluated in two different field environments. The expression of a possible target gene (Wdnh13) of the TdDRF1 gene was also investigated and analogies with the transcript profiles were found. The results of the qRT-PCR highlighted differences in molecular patterns, thus suggesting a genotype dependency of the TdDRF1 gene expression in response to the stress induced. Furthermore, a statistical association between the expression of TdDRF1 transcripts and agronomic traits was also performed and significant differences were found among genotypes, suggesting a relationship. One of the genotypes was found to combine molecular and agronomic characteristics.