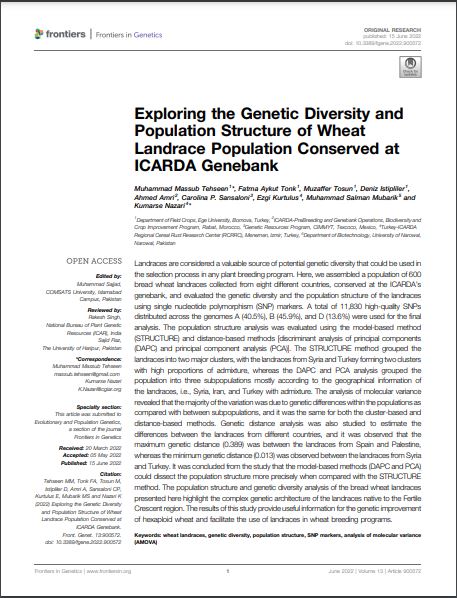 Landraces are considered a valuable source of potential genetic diversity that could be used in the selection process in any plant breeding program. Here, we assembled a population of 600 bread wheat landraces collected from eight different countries, conserved at the ICARDA’s genebank, and evaluated the genetic diversity and the population structure of the landraces using single nucleotide polymorphism (SNP) markers. A total of 11,830 high-quality SNPs distributed across the genomes A (40.5%), B (45.9%), and D (13.6%) were used for the final analysis. The population structure analysis was evaluated using the model-based method (STRUCTURE) and distance-based methods [discriminant analysis of principal components (DAPC) and principal component analysis (PCA)]. The STRUCTURE method grouped the landraces into two major clusters, with the landraces from Syria and Turkey forming two clusters with high proportions of admixture, whereas the DAPC and PCA analysis grouped the population into three subpopulations mostly according to the geographical information of the landraces, i.e., Syria, Iran, and Turkey with admixture. The analysis of molecular variance revealed that the majority of the variation was due to genetic differences within the populations as compared with between subpopulations, and it was the same for both the cluster-based and distance-based methods. Genetic distance analysis was also studied to estimate the differences between the landraces from different countries, and it was observed that the maximum genetic distance (0.389) was between the landraces from Spain and Palestine, whereas the minimum genetic distance (0.013) was observed between the landraces from Syria and Turkey. It was concluded from the study that the model-based methods (DAPC and PCA) could dissect the population structure more precisely when compared with the STRUCTURE method. The population structure and genetic diversity analysis of the bread wheat landraces presented here highlight the complex genetic architecture of the landraces native to the Fertile Crescent region. The results of this study provide useful information for the genetic improvement of hexaploid wheat and facilitate the use of landraces in wheat breeding programs.