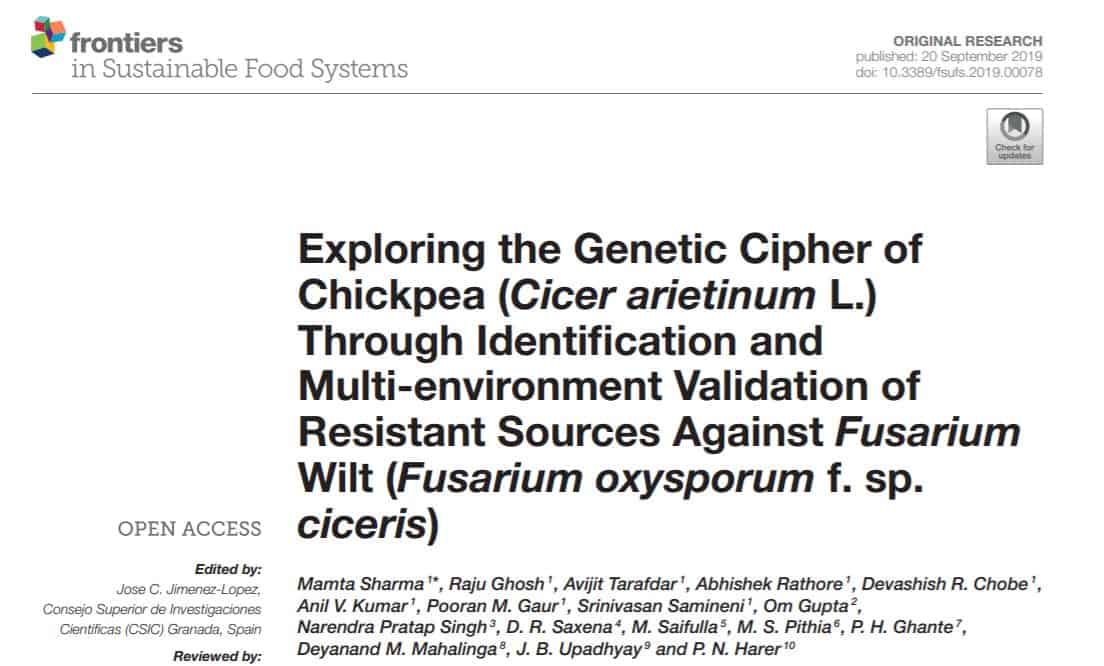 Fusarium wilt (Fusarium oxysporum f. sp. ciceris) of chickpea is the major limitation to chickpea production worldwide. As the nature of the pathogen is soil borne, exploitation of host plant resistance is the most suitable and economical way to manage this disease. Present study was therefore conducted with an aim to find new, stable and durable sources of resistance of chickpea against Fusarium wilt through multi-environment and multi-year screening. During 2007/2008 crop season, 130 promising genotypes having <10% wilt incidence were selected from initial evaluation of 893 chickpea genotypes in wilt sick plot at ICRISAT, Patancheru. Of them 61 highly resistant lines were selected through further evaluation in 2008/2009 and 2009/2010 crop season. Finally, a set of 31 genotypes were selected to constitute a Chickpea Wilt Nursery (CWN) and tested at 10 locations in India for three cropping seasons (2010/2011, 2011/2012 and 2012/2013) coordinated through Indian Council of Agricultural Research (ICAR) and ICRISAT collaboration. The genotype and genotype × environment interaction (GGE) indicated significant variations (p ≤ 0.001) due to genotype × environment (G × E) interaction. Most of genotypes were resistant at two locations, ICRISAT (Patancheru) and Badnapur. On the contrary most of them were susceptible at Dholi and Kanpur indicating the variability in pathogen. GGE biplot analyses allowed the selection six genotypes ICCVs 98505, 07105, 07111, 07305, 08113, and 93706 with high resistance and stability across most of the locations and eight moderately resistant (<20% mean incidence) genotypes viz., ICCVs 08123, 08125, 96858, 07118, 08124, 04514, 08323, and 08117. As chickpea is grown in diverse agro-ecological zones and environments; these stable/durable sources can be used in future resistance breeding program to develop Fusarium wilt resistant cultivars.