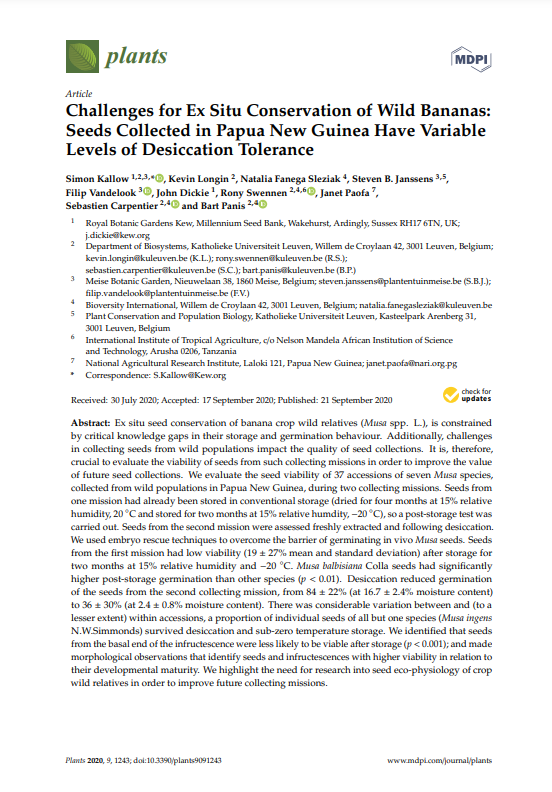 Ex situ seed conservation of banana crop wild relatives (Musa spp. L.), is constrained by critical knowledge gaps in their storage and germination behaviour. Additionally, challenges in collecting seeds from wild populations impact the quality of seed collections. It is, therefore, crucial to evaluate the viability of seeds from such collecting missions in order to improve the value of future seed collections. We evaluate the seed viability of 37 accessions of seven Musa species, collected from wild populations in Papua New Guinea, during two collecting missions.

Desiccation reduced germination of the seeds from the second collecting mission, from 84 ± 22% (at 16.7 ± 2.4% moisture content) to 36 ± 30% (at 2.4 ± 0.8% moisture content). There was considerable variation between and (to a lesser extent) within accessions, a proportion of individual seeds of all but one species (Musa ingens N.W.Simmonds) survived desiccation and sub-zero temperature storage. We identified that seeds from the basal end of the infructescence were less likely to be viable after storage (p < 0.001); and made morphological observations that identify seeds and infructescences with higher viability in relation to their developmental maturity. We highlight the need for research into seed eco-physiology of crop wild relatives in order to improve future collecting missions.